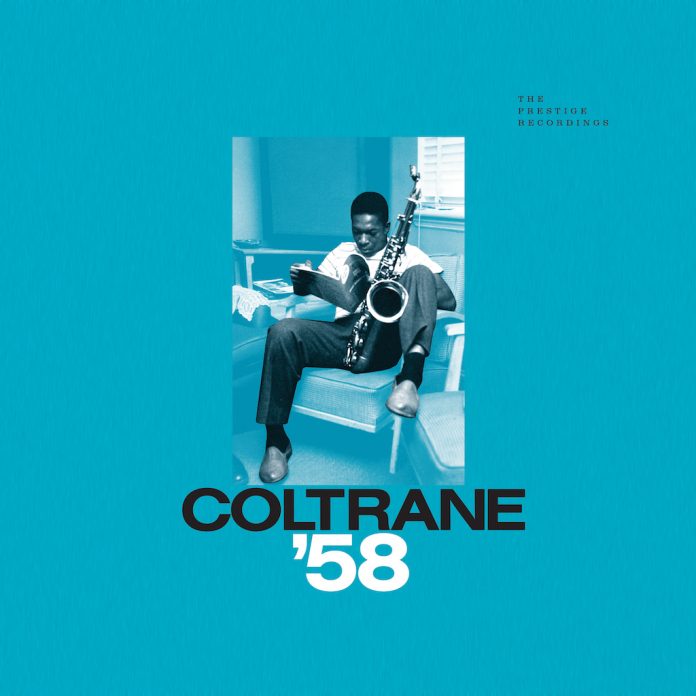 For many enthusiasts early Coltrane from the 1950s represents the best of his output. Classics like Blue Train and Giant Steps came from that era and the consistency of his performances with Prestige, the first independent label to sign him to a two-year contract, was impressive. Very early Coltrane from ’56 and the first five months of ’57 was somewhat tentative and he had not yet worked out the implications of his ever-evolving style of playing. By autumn of 1957 however he had spent six months in Monk’s quartet and recorded Blue Train and the first phase of mature Coltrane music was under way.

All of which makes this Craft Records set of all Trane’s leader dates for Prestige in 1958 a powerful collection. Much of what he played during this important year in his career was like a rehearsal for some of the developments and manner of performing that came later, such as the close relationship with his drummer (although here it is Art Taylor rather than Elvin Jones), playing with the pianist laying out as he does here on Goldsboro’ Express and his penchant for inviting new musicians, little known, to play alongside him in the studio, in this case trumpeters Wilbur Harden and the young Freddie Hubbard. And here, four years before he made an album with half a dozen short ballads for Impulse, Trane plays some terrific ballads where he and his sidemen stretch out to very good effect.

Let’s look at those ballads. The eight-LP collection kicks off with Lush Life, a powerful performance by Coltrane with Garland playing dramatic chords alongside him during the long introduction. Trane plays the melody straight at first but embellishes impressively during the middle section. His solo is warm, lyrical but quite forceful as he gives way to Garland who drops his aggressive stance to play light, skipping single notes in his solo. Byrd has a strong solo in bop mode but keeps it lyrical. The whole performance grows in intensity to make a fine, 14-minute reading of Strayhorn’s classic composition.

Arguably the best ballad of the set is I See Your Face Before Me where Trane plays a very slow version of the melody embellishing only slightly but tellingly. Garland responds well and Chambers plays a bowed solo that is almost heartbreaking in its slow, baroque styling. Theme For Ernie was written for altoist Ernie Henry who died at 31 in 1957 from an overdose. Slow and graceful, Coltrane proves again that he was already a master ballad interpreter. I Want To Talk About You is a master performance of Eckstine’s ballad that inspired the late John Dankworth to transcribe Trane’s solo to show his students. There are also strong readings of Then I’ll Be Tired Of You, Something I Dreamed Last Night and another slow burning but wonderfully structured version of Stardust. This is an emotionally charged, melodic interpretation that might surprise some who found Trane too hard and cold sounding at times.

Coltrane’s choice of sidemen at this time was also crucial to the quality of the music he produced. It is probably no accident that Garland, Art Taylor, Tommy Flanagan, Jimmy Cobb and Paul Chambers had all played with him at one time or another in various editions of the Miles Davis Quintet. Chambers deserves a special bouquet as he appears on every one of the 37 tracks here. His power, strength and deep sound are a tower of strength all the way through, arco and pizzicato. His solos, particularly the bowed ones, seem to grow organically out of the music as it moves along. Of the trumpet and flugelhorn players, all do well. Byrd is effective and supportive of his leader. He plays on The Believer, Nakatini Serenade and Lover on the 10 January sessions and turns up again later on Black Pearls, Lover Come Back and Sweet Sapphire Blues from 23 May.

It is also a bonus for collectors that this music is presented for the first time in chronological order as opposed to the haphazard way it was put out originally by Prestige. That company would hold back material for three, four and five years and release it to compete with Trane’s latest Impulse LPs, long after he had left Prestige.

Freddie Hubbard is inventive and obviously trying hard to produce melodic, telling solos, sometimes even at the expense of technical control. He fluffs a few notes and cracks one or two but his inventive prowess is at full throttle. The surprise really is Wilbur Harden, invited to appear on eight tracks by Coltrane who had recently recorded with him as leader on a Savoy record date. He was inexperienced and occasionally hesitant but there is no denying that his gospel flavoured, blues-based, laidback sound was a refreshing foil to Coltrane’s hard, often overpowering sound. He shines particularly on Stardust, Don’t Take Your Love From Me and I’m A Dreamer.

Art Taylor is on more tracks than the other drummers with Jimmy Cobb close behind him, 19 tracks to 12. Louis Hayes is on the first five selections from 10 January. All three drummers provide excellent, sometimes hard-driving, sometimes soft, swinging brush types of support, all working expertly in tandem with Chambers.

Of the blues, Big Paul is a standout piece. Chambers has the dedication and he takes control from the start with that big sound of his, walking steadily to begin with and playing strong, supportive lines behind Coltrane’s preaching solo. Sweet Sapphire Blues is a typical studio-improvised head with Trane in his element as he builds up a compelling statement with the rhythm section cruising along steadfastly behind him. Freight Trane was credited to Tommy Flanagan but he admitted later that this theme dated back to at least Dinah Washington in the 1940s, although nobody knew who wrote it.

Freight Trane is one of six tracks where Coltrane for the last time shared leader duties at Prestige, this time with guitarist Kenny Burrell. Kenny’s light, blues-based, soft-focus guitar stylings might seem at odds with Coltrane but the two mesh together surprisingly well, particularly on Lyresto, composed by Burrell and a gentle, melodic tenor sax and guitar duet, Why Was I Born.

Bop and hard bop are represented by Good Bait, Tadd Dameron’s well-known line and Little Melonie, Jackie McLean’s composition for his daughter. Trane is straight ahead with his attention to the theme and his personal variations that make both pieces sound as if he had written them. Ultra-fast pieces like Rise And Shine are interspersed with fast, medium and slow selections of bop, blues and ballad tracks so there is plenty of musical variety even on a mammoth collection like this.

This entire set is Coltrane in full flow, as a leader, albeit only on records at this stage but in command and sounding commanding. The sidemen are all top professionals with the possible exception of Harden but his contribution is sterling on this occasion. Coltrane ’58, starting 10 January 1958 and ending with a ballad, Time After Time, on 26 December gives us every one of his leader dates in 1958. It was quite a year for good jazz and, as this collection proves, a very special year for John Coltrane.

The eight LPs are housed in a thick blue book with several essays, photographs from the period and a full discography. Thick cardboard covers are provided for the discs, wrapped in poly-lined inner sleeves. Sound overall is very good although it might have been even better with an all-analogue production. Original master tapes were used but digital cutting employed. 192K digital does no favours to vintage recordings. Make no mistake though this is a well-produced box and a highly desirable collection of some of the very best early Coltrane, heard in his first successful phase.

Brian Morton - 29 October 2020
Going hatless on Ilkley Moor can be a bracing experience, or a fatal one, if you know the song, and if you’re from Yorkshire you certainly will. It’s thought...

Jazz Journal - 31 December 2020
Getting Down To Business is Dr Byrd's second recording for Landmark, and like the first, Har­lem Blues (Landmark LCD-1516-2), brings further evidence of his return to modern mainstream form. Although...