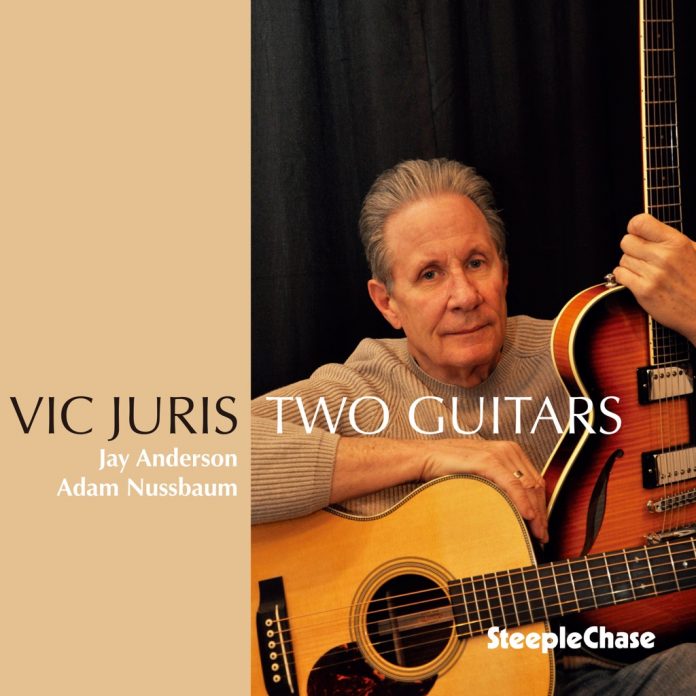 This is my third rave review in succession for guitarist Vic Juris’s SteepleChase releases – next time someone else should have a chance. Plays Victor Young (2017) and Eye Contact (2018) were both superlative displays of the art of jazz guitar. In Eye Contact, Anthony Pinciotti was replaced by Adam Nussbaum on drums, who continues here; Jay Anderson remains on bass.

This album differs from its precursors in mostly featuring original compositions by the leader. “I just kind of had a backlog of my tunes”, he explains in the sleeve-notes. “All these songs were written within the last five years”. There are dedications to two guitar-playing peers and friends, both of whom died in 2017 – the affecting To John, a real show-type-tune, is dedicated to John Abercrombie, and the funky A Chant For Larry is for Larry Coryell. Dreaming is a contrafact of You Stepped Out Of A Dream.

Another contrast is that on previous albums, Juris mostly played electric guitar, and some acoustic – here, the duties are divided more equally. Juris is a subtle stylist, who bends notes, and does microtonal glisses – careful listening is needed, therefore. It’s an intelligently conceived programme of material, in which Juris’s own compositions are outstanding.

The album opens with his composition Cerise, with its plangent harmonic structure. Wayne Shorter’s E.S.P. is another ingenious composition from the great saxophonist, and Juris gives a beautifully-paced interpretation. He features the acoustic instrument on the Beatles’ Julia, the Latin-feel Sarasota, and In Three For Two, a waltz for Juris and Anderson – the latter’s big, woody sound on bass is superbly captured. This is another really delightful release from this stellar musician.

Brian Morton - 18 December 2019
The sage of Woodstock arranged this get-together at his home studio. Jason Kao Hwang drove up on a March day in 2014 and they laid down eight beautiful improvised...