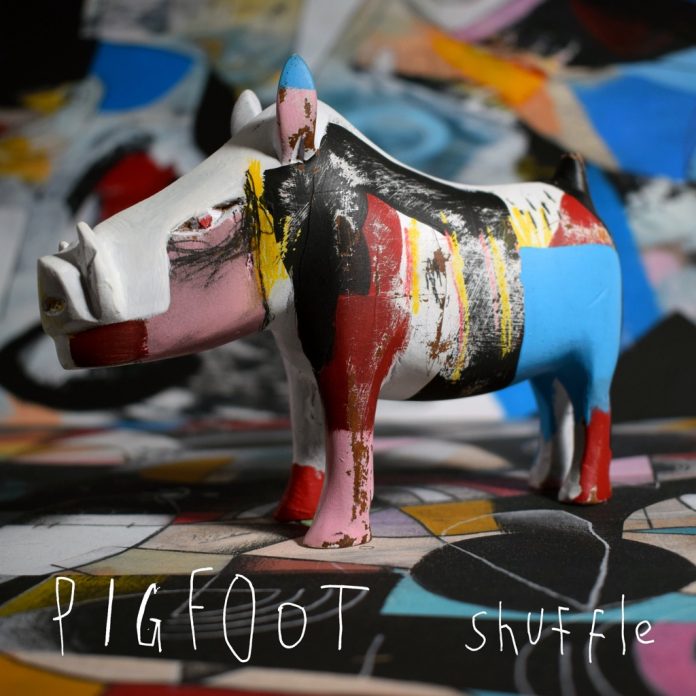 Talk about originality. Pigfoot have absolutely nailed it. The first offering from this idiosyncratic quartet, 21st Century Acid Trad (Village Life, 2014), was a killer in terms of its quirkiness. In his four-star JJ review, Garry Booth succinctly described it thus: “Eight classic themes drawn from the glory days of 20s/30s New Orleans and Chicago have been reimagined and somewhat astringently re-executed to brilliant, albeit lopsided, effect”.

This doesn’t really do it justice though; you really do have to hear the music because it’s just so damned different. With Pigfoot Shuffle, the band now turns its sights on songs from the 1940s to the 1970s. There’s only one personnel change with tuba player Oren Marshall replaced by reedsman James Allsopp. But there’s no loss of tonal colour suffered by this substitution.

However, the selection of music this time is slightly off-kilter. In between the irrepressible rock ‘n’ roll tracks such as Heartbreak Hotel, Jailhouse Rock and Hound Dog there is a trio of classical pieces; Dance Of The Seven Veils and medleys of Mozart’s Isis & Osiris and Dove Sono and Love Letters with Wagner’s Song To The Evening Star. The inclusion of these compositions tends to act as a breathing space for the more rumbustious stuff. There’s a compelling version of Curtis Mayfield’s Pusherman from Superfly (RCA, 1972) with Chris Batchelor taking the vocal part on trumpet and likewise he fluently “sings” the Stevie Wonder vocals on For Once In My Life.

Two Burt Bacharach tracks, now cruelly categorised by that hateful term, “lounge”, are beautifully arranged, all the better to truly savour the mesmeric contrapuntal effect of the brass. The woefully under-appreciated Wives & Lovers is given a bouncy treatment with Allsopp’s baritone initially stating the melody, followed by Batchelor’s free-flowing trumpet solo. Interestingly, The Look Of Love sounds more like a spontaneous post-gig jam, and all the better for it.

Of all the 10 numbers here, the most obvious standout is the absolutely electrifying version of Led Zeppelin’s Black Dog which positively leaps out of the speakers and is probably the most dynamic jazz interpretation of Zep’s music since Alexis Korner’s short-lived C.C.S. recorded their blistering rendition of Whole Lotta Love (RAK, 1970). Fortunately, Pigfoot’s Black Dog can be heard on YouTube.

There’s not a bad track here and much of it will instantly have listeners dancing in the aisles or at least between the sofa and armchairs. But how best to describe this music? With its string-less, highly imaginative instrumentation “21st Century Acid Trad” is as good a term as any, but what about “Steampunk for the jazz generation”?