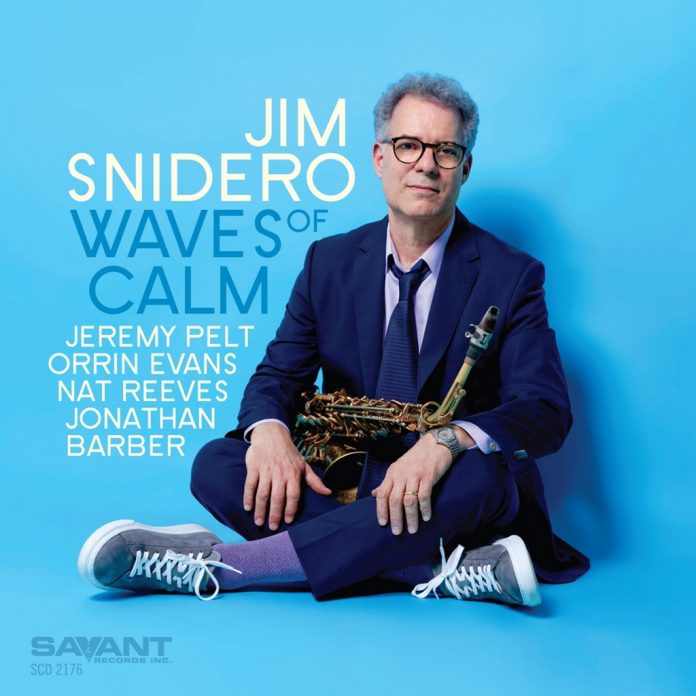 Alto saxophonist Jim Snidero has built up an extensive catalogue on Savant, and on Waves Of Calm – his eighth release for the label – he is joined by a group of talented musicians including The Bad Plus pianist Orrin Evans, and trumpeter Jeremy Pelt – who co-led Snidero’s previous album, Jubilation! Celebrating Cannonball Adderley, a tribute to the alto sax giant. Waves Of Calm takes a different approach in terms of its inspiration, a son’s reflection on his father’s struggle with Parkinson’s disease.

The album’s title pretty much hits the nail on the head in describing much of its material. The three chosen standards interspersed with the album’s original compositions – Old Folks, I Fall in Love Too Easily and If I Had You – are very pretty ballads on which the saxophone takes the spotlight, and Snidero’s playing evokes a warmth and tenderness here which makes for very easy listening.

Tracks like Truth and Visions are comparatively jaunty, and it is on these pieces where Pelt’s trumpet solos can be best appreciated. These, alongside Evans on an overdubbed Rhodes, create a sound somewhat comparable to Miles Davis’s Miles In The Sky, albeit much more subdued.

The music can generally be categorised as lounging “cool jazz”. There’s no doubting the ability of the musicians and there are some great solos on the album, particularly from Snidero and Pelt, but it doesn’t seem very ambitious. It feels quite safe – perhaps at times even a little bland, although this criticism might simply be down to personal preference. Waves Of Calm is worth a listen and should appeal to fans of the style.