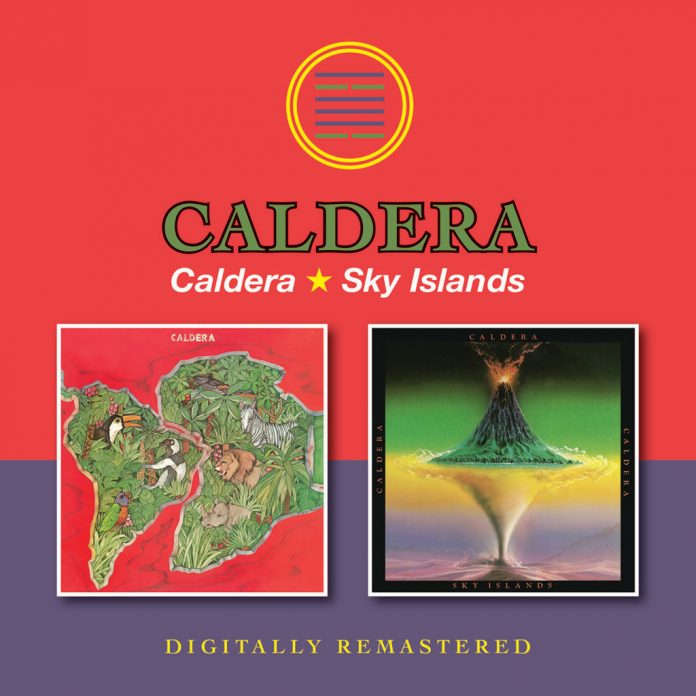 To say there’s little written about the relatively obscure jazz fusioneers Caldera (Spanish for Cauldron) is something of an understatement. There may well be nothing save for Charles Waring’s excellent liner notes accompanying this reissue. Crucially, he quotes extensively from an interview with Caldera founder and guitarist Jorge Strunz, who reveals much of the salient back story to this band.

They auditioned for Clive Davis on behalf of the newly formed Arista label who thought they were good musically and offered them a deal but with the caveat that they needed “grooming on stage…whatever that meant”. Despite the flattering offer from Davis the band went with Capitol instead and released four albums on the label between 1976 and 1979 before calling it quits. Why the band ultimately failed isn’t clear but perhaps their high-octane and Latinesque fusion arrangements were passé, The Mahavishnu Orchestra and Return To Forever having methodically exploited that seam of gold. Perhaps for Caldera that boat had sailed.

The overarching, pervasive feel to the band is a mélange of Return To Forever plus the Mahavishnus with perhaps a soupçon of Santana thrown in for good measure, courtesy of the plethora of percussion(ists). Taken in isolation, the main theme to Guanacaste is moodily filmic, bookending some fine trombone and guitar solos, the latter particularly impressive. It’s also extremely memorable. Coastin’ offers shades of Headhunters (another near-soundalike) with funky clavinet, copious percussion and furious Al Di Meola-esque guitar. Exaltation with Flora Purim-like vocals is straight out of the RTF songbook plus a Mahavishnu-type frantic ascending arpeggio motif à la The Inner Mounting Flame. Jangly Fender Rhodes abounds on Synesthesia plus there’s some truly coruscating guitar there too.

If the first album was instrumentally hyper-inclusive (Caldera were prone to throw in the kitchen synth), the band’s second offering, Sky Islands, co-produced by Earth, Wind & Fire’s Larry Dunn, is more so. The title track is a veritable funk and percussion fest. Ancient Source is vocally soulful but augmented by schmaltzy strings and bubbly synthesizer. The bouncy Pegasus is infused with fluid acoustic guitar and Carnavalito initially evokes shades of El Condor Pasa before it goes full-on Weather Report (synths, ruinous handclaps and a soprano sax solo). Seraphim (Angel) opens with strings but rapidly incorporates more handclappy funkusion interspersed by brief flute, tenor sax and acoustic guitar solos. There’s also some genuinely impressive acoustic guitar on the short Indigo Fire. Strunz, who following the breakup of Caldera, formed an eclectic acoustic guitar duo with Ardeshir Farah (Strunz & Farah), was capable of excellent electric playing such as evidenced by the frenetic guitar solo on El Juguete, which is equally tasteful and masterly.

So why the band didn’t succeed like Yellowjackets or The Rippingtons (both still extant after all these years) is unclear. Individually (especially Strunz) the musicians were undoubtedly talented but that might not have been enough – it might have required the guiding force of a McLaughlin or Corea to launch the group into the stratosphere. Or maybe they just lacked “grooming” (whatever that means).

Whilst most of the tracks are certainly good in parts, both the albums on this typically well-packaged two-fer often play like a spliced-up “best of jazz fusion” mix, which ultimately proved self-defeating.

Michael Tucker - 02 February 2019
The follow-up, companion volume to Johänntgen's excellent Henry, recorded in 2016 in New Orleans, Henry II was recorded in Zurich but loses not a drop of the N'arlins gumbo...