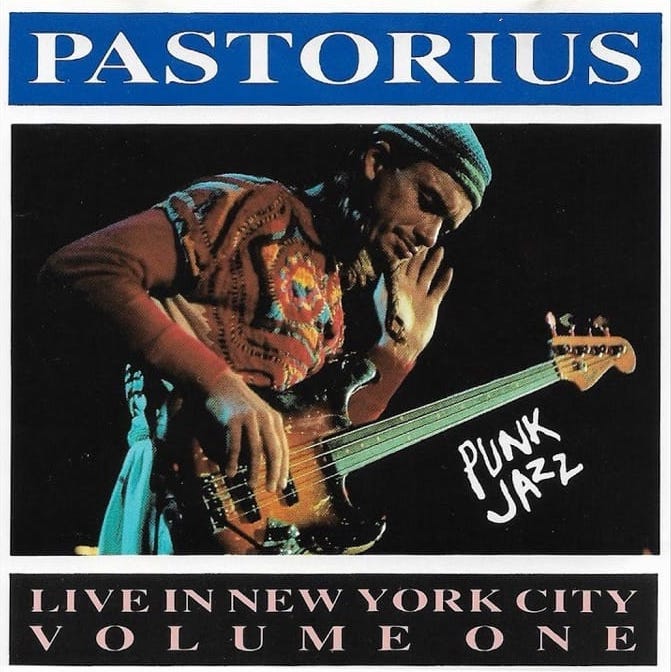 Jaco’s discoveries have become a commonplace, his innovations standard elements in the electric bass vocabulary, but any new evi­dence of his genius is valuable. These issues capture him jam­ming in New York and Boston clubs in the mid-1980s, and both have Walkman-like fidelity, although the New York set has the better level.

Much of the reper­toire will be familiar to those who know Jaco’s work in Weather Report and his own Word of Mouth big band, though these readings are rather cruder than the originals.

The New York set opens with the breakneck Donna Lee theme played by the ensemble. This is swiftly followed by Dania, a brisk swinger which is reminiscent of Eric Dolphy and has solos from all the horns. Teen Town is a trio by Pastorius, Dennard and Bullock, with Bullock’s guitar supplying the haunting saxophone chords before stretching out on a blister­ing solo. The piece ends with a protracted, largely unvarying groove; it seems even giants run out of ideas at jam sessions. Jaco’s funky Motown lick on Alfred Ellis’s The Chicken is as irresistible as ever, though low in the mix and soon obliterated by Bullock’s chuck-a-chucking guitar. The trio Invitation is dominated by Bullock’s careering guitar and ends with two bass solos, one grotesquely distorted, the other clean.

N.Y.C. Groove # 1 is more than eight minutes of funky F7 with a dash of reggae and sounds like it was jammed up on stage; Bullock as ever leaves no table unturned, quoting conspicuously from the Brecker Brothers’ Skunk Funk, but as with many an undirected jam, this groove gets stuck and is faded.

Punk Jazz lasts for over 17 min­utes thanks to a lengthy coda based on The Star-Spangled Ban­ner and includes some announcements which suggest the set is from 1985. The evening is rounded off with a solo organ ren­dition by Pastorius of his Liberty City.

Jaco also flexes his pianistic muscles on PDB’s Three Views Of A Secret. His quotation from Clair De Lune is a fitting prelude to his own dreamily impressionistic tune, and the lonely electric piano chords, wobbling uncertainly because of tape flutter, are also a pathetic, poignant reminder of his early death in 1987.

PDB is the better paced of the two sets. It’s frequently upbeat but never hysterical, the atmo­sphere is more relaxed, the sound better balanced, the arrange­ments more considered. The funky revision of Bobbie Gentry’s Billie Joe, Bullock’s Son Of Creeper (which sounds like a trib­ute to Jimi Hendrix), the beautiful Continuum and the straightahead workout on Dolphin Dance all have a grace and charm which is missing from the more strident New York session.

Live In New York Volume One is available mail order from Big World Music Inc. PO Box 128, 315 Empire Boulevard, Brooklyn, New York 11225, USA. The DIW should be in the shops.

Nigel Jarrett - 05 August 2019
There's always been a double irony in the 10-year-old Hackney Colliery Band's name. Coal isn't mined in many places these days, especially not beneath inner London. And the traditional...