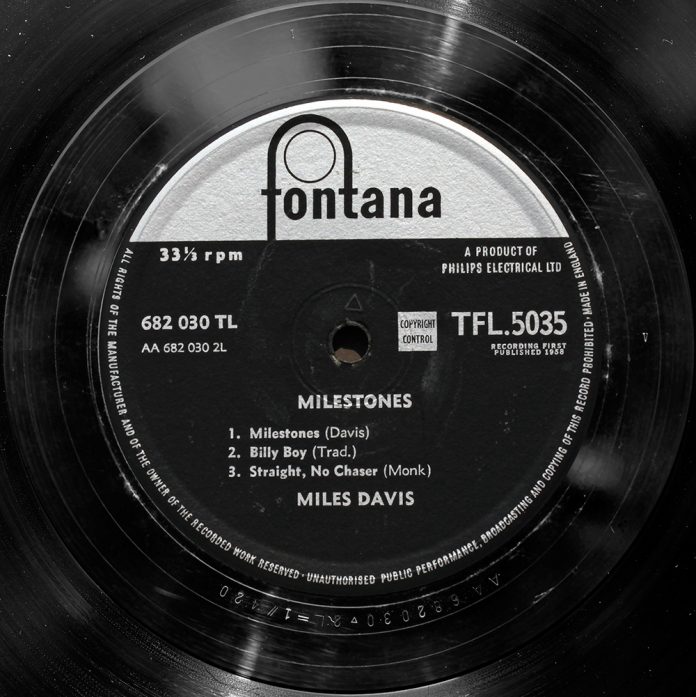 The Miles Davis Quintet is augmented by Julian “Cannonball” Adderly on alto sax for this album and although I find it less satisfying than the Quintet’s previous “Cookin'”, “Relaxin'” and “‘Round About Midnight” sets it is nevertheless a satisfying record.

I prefer the earlier records simply because I have never been an admirer of the Parker-influenced Cannonball. But that’s a purely personal view. I must admit I’ve never heard him play as he does here. He has more warmth and (no doubt inspired by the company) contributes some fluent and free-swinging improvisations, particularly with tenor player Coltrane in “Dr. Jekyll.”

For the rest, my praise is unqualified. Miles, himself, is on his very best form, playing intricate, delicate solos that effectively build up to beautiful climaxes. His ideas are exquisitely conceived, he is wonderfully relaxed, melodic and mellow. Whatever the man plays he does it with intelligence, originality and in the very best of taste.

Coltrane continues to improve. His tone is less strident, his playing more melodic. He has become a highly individual voice and a major figure in jazz.

Pianist Garland is excellent all through and “Billy Boy”, a solo feature with bass and drums accompaniment, is perhaps his best work to date on record, swinging lightly and sensitively all the way.

Philly Joe and Chambers, working perfectly as a team, are magnificent in support. Philly used to be one of the loudest drummers in the business but here he is restrained, laying down a crisp and pulsating rhythm. Chambers has a bowed solo on “Billy Boy” that is a masterpiece.

All six musicians play with tremendous cohesion. Undoubtedly, this is one of the modern jazz records of the year – and if you like Cannonball you may think it is THE one.
Kennedy Brown

Nigel Jarrett - 24 February 2020
Lovers of both jazz and contemporary (non-jazz) music should find drummer and composer Colin Hinton's album of interest. Such ventures on the perimeter of what most understand as core...