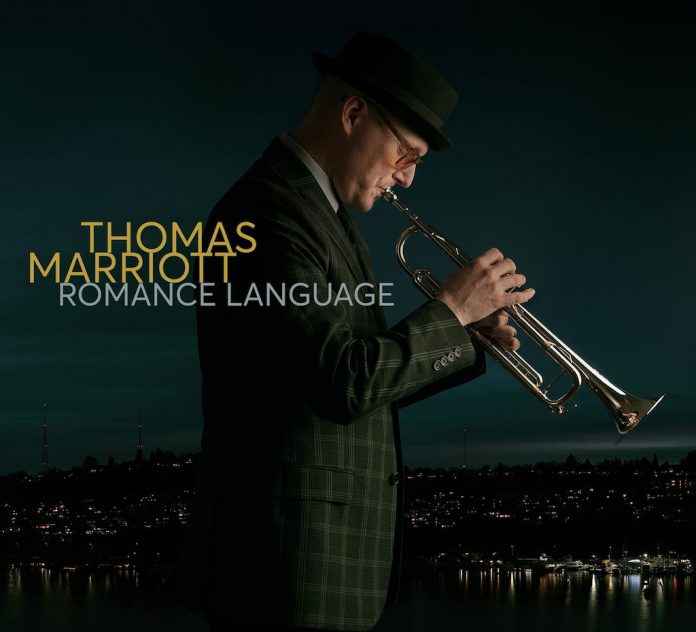 Jazz might be called the art of theme and variations, the art applying as much to the theme as the way a musician plays around with it. Everyone knows the themes, the tunes, whether written by a jazz composer/musician or someone working in a showbiz area considered not unadjacent. But rarely does anyone devote as much attention to the tune as unadorned entity as trumpeter Thomas Marriott does on this generally slow-tempo album.

If there is such a thing as a “Seattle sound” in jazz today, it would have to involve Origin Records, whose list includes Marriott, the cool vibes player Joe Locke and the piano/keyboards musician Ryan Cohan. Spotlighting the melody alone – and here Marriott plays many of them more or less deadpan straight – requires an accompaniment that neither detracts from it (the assumption being that it’s worth emphasising) nor merely and perhaps irritatingly prodding it forwards.

The responsibility for providing enhancement is delegated in an important sense to Cohan, who as well as playing piano and keyboards is in charge of orchestrations, “software instrument performances” and “programming”. Such gizmo verbiage, common enough when applied to studio recordings these days, might suggest a marshalling presence that could be nothing but over-bearing. Not so. One sometimes has to listen hard for what is constituting the quintet’s pleasing depth and density, with Cohan’s contribution anchored to the interactions of Locke and Marriott, especially on the unison passages in Locke’s Alibi Room and the hand-in-hand exploration of Bobby Hutcherson’s Now. (Unless there’s a Bobby Hutchinson, which is doubtful – computer says “No” – the composer’s name is mis-spelled).

On flawless trumpet and flugelhorn and now and then using the Harmon mute, Marriott strikes a nice balance between honouring the tune and allowing the orchestrations to pay them equal homage: in underlining the brooding atmosphere of Locke’s Forgiveness; refusing to be rushed by John Bishop’s steady rock-drumming in Bob Schneider’s Piggyback; and without anyone wishing to add to the more complex thematic structure of Cohan’s Kampala Moon. Individuals step forward at just the right time and for no longer than the arrangements consider appropriate. Typical of this prudence is Cohan’s piano solo on Pat Metheny’s Always And Forever and Marriott’s statement of intent on Randy Newman’s Dexter’s Tune, which opens the set.

The danger of the album’s “romance language” is that it might pall, illustrate that some tunes are better than others, or suggest too much self-effacement, a possibility that could have occurred to bassist Jeff Johnson as he keeps things in stolid check. It’s a minor quibble; like everyone else, Johnson does his job well.

François van de Linde - 02 September 2021
Why not go all the way? That must’ve been the thought on the mind of vibraphonist Simon Moullier when compiling repertoire for his sophomore album Countdown. Among others, Moullier,...