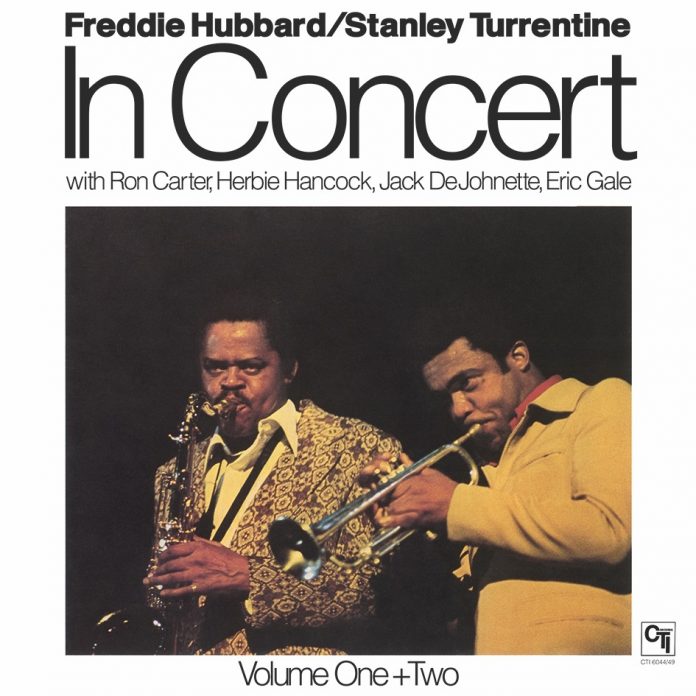 Originally issued as two separate LPs these have been combined into a double vinyl release by Speakers Corner Records. The music captured is from a CTI short tour of US cities, in this instance taking in Chicago and Detroit.

The sextet is on good form throughout in front of very enthusiastic audiences at both venues with Hubbard sounding strong and confident in his newish role as a competent purveyor of the new jazz-rock style, initiated by Miles Davis with his Bitches Brew release in 1969 and gathering considerable momentum by 1973. His sound is as strong as ever as he happily swaps licks with Turrentine and Hancock and joins in the free collective improvisation of these concerts.

Turrentine seems to have lost, or abandoned his warm, lyrical sound for a far more aggressive, almost strangulated tone but he is as inventive as ever within the restrictions of this style of playing.

The music kicks off innocuously enough with Povo, a soft-focus bluesy piece with both front liners improvising happily over a dense rhythm background where Hancock is constantly digging out new paths to follow as Carter provides a booming bass line on electric bass, guitarist Gale chords along contentedly and DeJohnette stokes a rhythmic fire. The drummer is constantly alert to wherever this music goes and it moves frequently with Hancock looking for new directions and new paths to explore all through.

The two versions of Gibraltar are heavy and full of pounding rock drums and adventurous solos by Hubbard, Turrentine and Hancock. Gales’ role, here as on the other tracks, is mainly as support and to thicken up the texture of the rhythm.

The free collective improvisation here is comprehensive and if it owes something to the innovations of Ornette Coleman’s quartet a few years earlier, on this occasion the music is simpler, more basic but conventionally chord based.

All play very well, responding to the enthusiastic audiences at both locations with the electric instruments allowing the musicians to crank up the sound levels frequently, to the audience’s delight.

John White - 16 January 2020
An accomplished hard bop trumpeter and a prolific composer, Brian Lynch is not yet a jazz household name in the UK. Born in Urbana, Illinois, he grew up in...