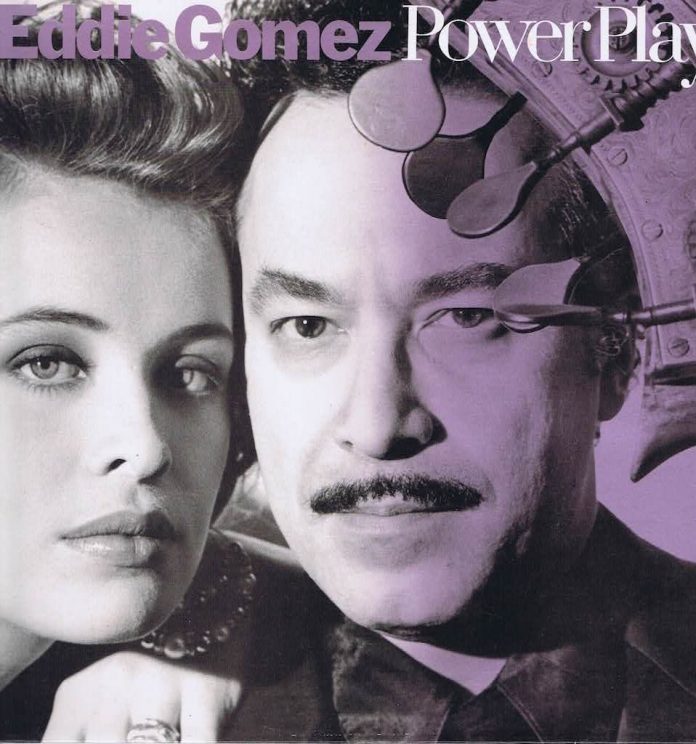 Both of these sessions cover a wide variety of material, but each seems to represent a different aspect of the bassist’s character. Broadly speaking, the New York set is more electric and commercial, the Japanese one more ‘acoustic’ and esoteric.

Power Play’s cover features a coiffured Gomez in designer suit, and inside there is matching music. There are two rockers — Power Play and Steig’s curiously dated Mr Go — a routine samba (Loco Motive), three ballads (Spanish Flower, Amethyst and Forever) and two swingers (Mel and W.110th St). Much use is made of tastefully synthesised strings, and a degree of overdubbing or synth bass is used.

Among the album’s delights are Mel, which is a superb illustration of Gadd’s magical ride cymbal, and the headlong bopper W.110th St, a fabulous example of the music that made New York famous; it features classic singing Gomez bass lines and top form Brecker. Of the ballads, Amethyst is a doleful duet from Gomez and Hall, with the latter’s slightly chorused guitar exemplifying his influence on the likes of Scofield and Metheny.

Apart from the fact that Gomez takes a number of themes and solos and plays a good deal of arco bass, there is little to identify this as a bassist’s album, and given the other talents that are thus spotlighted, this may be no bad thing.

On Gomez, the accent is on the piano-led ensemble, especially the trio. Chick Corea dominates and drives the feisty swinger which opens the set, but sadly, after this fine start, the date is tarnished by the appearance of a less than polished local talent. Kazumi Watanabe is a virtuoso by any standard, but on the electric instrument he fails to edit his work and lets his poor sense of time run away with him. In other contexts, this might matter less, but it’s an approach that is well out of order in this setting, and his brash solos come as rude intrusions.

Otherwise there is much to savour. Chick Corea is featured on the powerful opener, the light samba of Santurce, the impressionism of his own Japanese Wa/tze (sic), the two piano/bass duets of Zimmerman and Pops And Alma and the thoughtful fusion of his own Ginkakuji, which employs the faithful old Fender Rhodes as well as microchip synths. For contrast, there is the bass/drum duet plus overdub of Mez-Ga and the Ornettish Row, Row, Row, featuring saxophonist Shimizu.

Finally, as if to save Watanabe’s rep, the set closes with a sensitive bass and acoustic guitar duet on Bill Evans’ We Will. Watanabe makes silly technical errors here, but his tone and ideas are pleasing. If only he could have played this instrument throughout.
Mark Gilbert