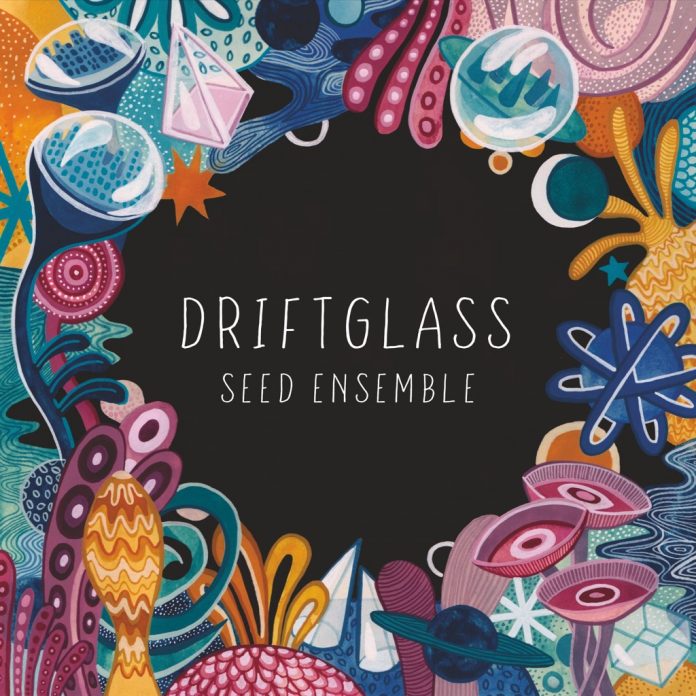 Driftglass is the debut album from Seed Ensemble, a London-based collective led by Cassie Kinoshi. Kinoshi is one of London’s most publicised new young alto saxophonists. She’s a member of London jazz groups Nerija and Kokoroko, she was shortlisted for the BBC Young Composer of the Year award in 2012 and was nominated for Breakthrough Act of the Year at the Jazz FM Awards in 2016.

But for all of her individual achievements, the 10-piece Seed Ensemble is very much a cohesive group project, which – like many current London jazz groups – draws on influences from the city, West Africa and the Caribbean.

There are no instances where Kinoshi takes the limelight away from the other musicians and rightfully so, because Driftglass is far from short of talent. Trumpeter Sheila Maurice Grey, tubist Theon Cross, keyboardist Joe Armon-Jones and guitarist Shirley Tetteh are just a few of the other musicians that make up Seed Ensemble, all of whom have made a name for themselves on the London jazz scene through various projects.

Another member of the ensemble is Sarah Tandy, an emerging pianist who recently released her own debut album, Infection In The Sentence. Tandy is one to listen out for on Driftglass, with some great soloing on Afronaut.

The album’s opening track – The Darkies – begins with a sombre double bass solo reminiscent of Jimmy Garrison’s on A Love Supreme. What follows is a bold and defiant arrangement of brass and horns, with rich harmonies that prove Kinoshi’s abilities as a composer. Jazz today is just as connected with social and political issues as it has been in the past, and The Darkies is written as a response to a resurgence in racism.

Another example of this socio-political connection is Wake (for Grenfell), dedicated to the 72 victims that died in the Grenfell Tower fire. The track opens to the sound of marching footsteps and lyrics taken from the poet Langston Hughes: “Tell all my mourners to mourn in red, ’cause there ain’t no sense in my bein’ dead”. This is sung by London jazz singer Cherise Adams-Burnett with soulful and biting passion, alongside chanting from the rest of the ensemble.

Adams-Burnett is not the only additional musician on the album; Driftglass also features spoken word by XANA and Mr Ekow, adding a hip-hop flavour which isn’t unusual given the merging of genres that the new London jazz scene has become known for.

Driftglass is an impressive record with a whole host of great musicians reflecting the current London jazz scene, and some excellent compositions by Cassie Kinoshi. Seed Ensemble are off to a running start with this debut.

Simon Adams - 23 July 2021
Brooklyn-based pianist Richard Bennett describes his music as “bounce jazz”, and while that sounds trite, it is a surprisingly accurate label, for each track verily bounces along with wit...