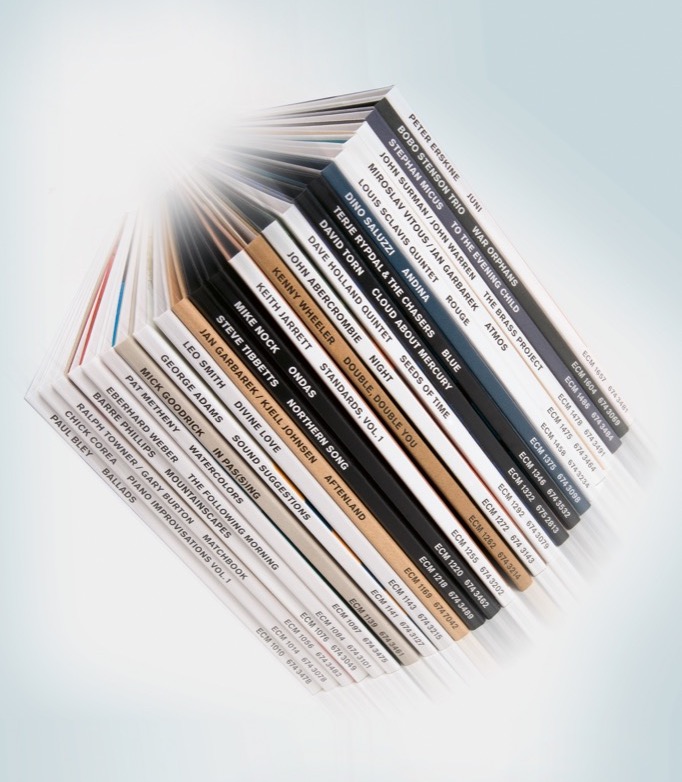 This is the first half of the batch of 50 re-releases issued in this, the 50th anniversary year of ECM – the independent company which producer Manfred Eicher started at the end of a decade of tumultuous activity in jazz, much of it centred on the idea of free jazz.

The first ECM disc, Mal Waldron’s Free At Last, was recorded in November 1969. While the pianist’s fine trio date with Isla Eckinger (b) and Clarence Becton (d) doesn’t feature here, its title remains as relevant to the music considered below as do the reflections Waldron offered in a brief sleeve-note for the album. “Free jazz for me”, said Waldron, “does not mean complete anarchy or disorganised sound. In my vocabulary, disorganised sound still means noise. And don’t forget that the definition of music is organised sound […]”.

As anyone familiar with the productions of ECM will know, free jazz – or free improvisation, if you prefer – is very much a part of the label’s identity: witness the second ECM album Just Music – the septet session with, a.o., Alfred Harth (ts ,cl, bcl, t) and Tomas Stöwsand (clo, f) which was recorded in December 1969 – and subsequent releases like Improvisations For Cello And Guitar (1971) by Dave Holland and Derek Bailey, Paris-Concert by the Circle group of Anthony Braxton, Chick Corea, Dave Holland and Barry Altschul, also from 1971, The Art Ensemble of Chicago’s Urban Bushmen (1980) and the Evan Parker Electro-Acoustic Ensemble’s Memory/Vision (2004).

However: the freedom of conception and expression one finds at ECM has always eschewed the ideological dogmatism which can infect those whose enthusiasm for free jazz can risk rendering them deaf to such (freshly configured) matters of melody and harmony, compositional character and rhythmic groove as are to be relished in these splendid reissues.

Each is presented in a laminate cardboard fold-out format, as durable as it is visually attractive. Some of the albums have been out of the catalogue for over a decade while others were deleted more recently. Three – the Corea, Jarrett and Erskine items – are still available, but only as part of ECM’s multi-CD box-set series (respectively, Solo Piano, Setting Standards and As It Was).

Time-wise these reissues range from Paul Bley’s Ballads of 1971 to the Peter Erskine Trio’s Juni of 1999 (featuring the late and much lamented John Taylor) with nine albums coming from the 1970s, 10 from the 1980s and six from the 1990s. Presumably, material from later decades may be in the second batch due later this year.

If I had to choose one album as key here, it would be Paul Bley’s Ballads. Released in 1971 but featuring tapes recorded in New York in 1967, it has Bley (p) and Barry Altschul (d) on all of its three tracks, with Gary Peacock (b) on the 17-minute Ending and Barry Levinson (b) on the remaining, and shorter, Circles and So Hard It Hurts. Eicher would soon sit Bley down at a better piano on the classic Open, To Love solo session recorded in Oslo in 1972 by Jan Erik Kongshaug. However, even with a total time of a mere 32 minutes or so, Ballads remains exemplary. Its patiently wrought blend of spacious, intensely focused lyricism and dramatically cast yet subtle cross-rhythms and textures prefigures a good deal of what would come to distinguish the poetics of ECM.

A good deal, but not all: far from it. The uniformly outstanding clarity or transparency of sound which quickly came – and continues – to distinguish ECM productions, allied to a literate freshness of approach to matters of cover-sleeve design, graphics and imagery, signals anything but uniformity of musical content. Hour upon hour spent listening again to albums I’ve cherished for many a year has served in spades to remind me of the unmatched quality and range of the ECM catalogue.

To give only the briefest of indications: the music here runs from the equally irresistible albeit very differently cast figures of Chick Corea’s solo Piano Improvisations Vol. 1 (1971) and the Keith Jarrett Trio’s Standards Vol. 1 (1983) to the keening Nordic moods of guitarist Terje Rypdal’s Blue (1987) and the striking creation of John Surman (on piano as well as saxophones and clarinets) and John Warren (conductor) that is the now piping and burning, now liquid, reflective and swingingThe Brass Project (1993). Along the way these reissues also embrace unclassifiable gems such as guitarist Steve Tibbetts’ alternately meditative and rocking Northern Song (1982) with percussionist Marc Anderson and multi-instrumentalist Stephan Micus’s world-bridging solo suite To The Evening Child (1992).

Try the urgent vocal interplay of the Mingus-like Gridlock (Opus 8) from the Dave Holland Quintet’s freshly swinging Seeds Of Time (1985) – and then turn to the flowing chamber music of Ralph Towner and Gary Burton on Matchbook from a decade earlier. Or sample the stilled, genre-dissolving meditation – as near to serialism as it is to plainchant – that is the brief Linje from Aftenland, the haunting duo album recorded in a Stockholm church in 1979 by the Norwegians Jan Garbarek (saxes, wood flute) and Kjell Johnsen (church organ). Enjoy further distilled reflections, this time of a folk-turned nature, on Argentinian bandoneon master Dino Saluzzi’s solo Andina (1988) – or welcome the blend of reflective phrase and bustling groove which distinguishes albums like George Adams’ potent Sound Suggestions (1979), with the memorable compositions BABA and A Spire by Kenny Wheeler, and Wheeler’s own Double You, Double You (1985).

These last two are just some of a good many releases – including distinctly different but equally fine guitar-led sessions, Mick Goodrick’s subtly flowing In Pa(s)sing (1979) and John Abercrombie’s cooking, in-part reggae-turned Night (1984) – where Jack DeJohnette is in typically exhilarating form. The bar-slipping subtleties of Norwegian master Jon Christensen, another key drummer on many an ECM date, can be heard on New Zealand pianist Mike Nock’s Ondas of 1982, with its beautiful, poetically stepped ballad Land Of The Long White Cloud, and pianist Bobo Stenson’s 1997 War Orphans trio date with Anders Jormin (b) – where a programme of searching originals from Jormin and the Swedish leader is enhanced by wide-ranging material from Ornette Coleman, the Cuban Silvio Rodriguez and Duke Ellington.

There are surpassing saxophonists to enjoy, with Adams and Sauer (Sound Suggestions), Brecker (Night, Double You, Double You), Garbarek (Aftenland, Atmos) and Surman (Mountainscapes, In Pas(s)ing, The Brass Project) all compelling attention. And Steve Coleman is no slouch on Seeds Of Time.

Drawing as it does upon members of Oslo’s Philharmonic Orchestra, Weber’s reflective and ultra-legato The Following Morning (1976) with Rainer Brüninghaus (p) evinces but one aspect of the multi-hued manner in which ECM productions have helped revision matters of composition and improvisation, instrumentation and time, texture and dynamics in contemporary music. Equally exploratory but very different factors distinguish the densely driven synthesizer-stippled power of Mountainscapes, with heavyweight drummer Stu Martin on board; Leo Smith’s exquisitely voiced Divine Love (1979), David Torn’s Eastern-inflected, rock-fired Cloud About Mercury (1987) and the noble, both austerely and gorgeously realised The Brass Project (1993) – where John Marshall, a further most potent and distinctive drummer, shines.

In reviewing the recent Art Ensemble Of Chicago And Associated Ensembles ECM box-set, Brian Morton spoke of music that was soul food for a generation. It’s a metaphor which applies with equal felicity to all the diverse but consistently superb music of the touchstones considered here. Happy anniversary, ECM!

Gareth Thomas - 25 November 2019
Five years since the release of their last album – Merkaba – the Alan Evans Trio (aka Ae3) return with The Wild Root, a 40-minute showcase of strong soulful...