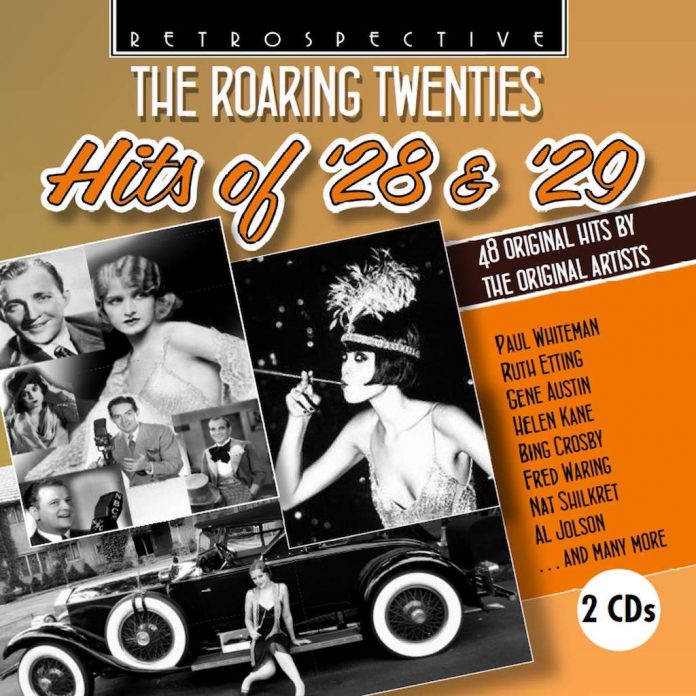 Scott Fitzgerald gave jazz a scope beyond its ambition when he coined the term “Jazz Age”. Those who did most of the roaring in the Roaring Twenties were not particularly interested in jazz as such, only the milieu of which it formed a relatively small, intense and slightly displaced power source.

It was ever thus: flappers and their fashion-followers were, in terms of musical tastes, the 1920s middle-of-the-roaders. Not the least of Fitzgerald’s offerings to posterity was the implication that what his small coterie did was what everyone was doing. What he understood as jazz may not have been shared by jazz musicians.

Some of these issues are reflected on this double album. It’s a narrow area of interest – the final two years of Fitzgerald’s “lost decade” – but the collation by Retrospective’s Ray Crick, with the position reached by the songs in the hit parades of the day, demonstrates how musically busy it was.

The place of jazz in this arena of primarily songsters was typified by Paul Whiteman, its self-styled “King”, whose “Among My Souvenirs” was a number one hit in 1927-28. He “wore” a plastic crown and may privately have dismissed the monarchic title, but he knew where the fire was most intense in having Bix Beiderbecke and Tommy and Jimmy Dorsey on the pay roll.

Jazz permeates a lot of these charts, albeit illustrating by default that the treatment by jazz musicians of standard songs from music theatre and elsewhere was not as popular as those versions by performers more besotted with the originals. “You’re the Cream in My Coffee”, from the Henderson/De Sylva/Brown musical Hold Everything!, and performed by violinist Ben Selvin and his Broadway Nitelites, is a good example. Selvin didn’t need pure jazz. He was prolific because his band performed the same kind of stuff under pseudonyms. Al Jolson was vaudeville, his “There’s a Rainbow ‘Round My Shoulder”, by Dreyer & Rose from the film The Singing Fool, a number one hit and the flipside of “Sonny Boy”, no less. Louis Armstrong and Ben Pollack are here, but also Maurice Chevalier and Eddie Cantor.

This is not a survey of jazz; it’s a survey of the end of a decade in which jazz was preparing to enter a new and bountiful period. There’s not even a suggestion that much of the music had its source in pure jazz. It’s as complicated a historical picture as Crick’s assemblage is technicoloured, even given that several musicians make more than one appearance. Jazz devotees need to take in the wider picture.

Discography
CD1: Among My Souvenirs; Diane; The Man I Love; Back in Your Own Backyard; Ol’ Man River; Laugh, Clown, Laugh! Let a Smile Be Your Umbrella; Ramona; Sweet Sue, Just You; Together; Ah, Sweet Mystery of Life; Girl of My Dreams; That’s My Weakness Now; My Angel; The Sidewalks of New York; Just Like a Melody Out of the Sky; Sonny Boy; Get Out and Get Under the Moon; I Can’t Give You Anything But Love; Jeannine, I Dream of Lilac Time; There’s a Rainbow ‘Round My Shoulder; I Wanna Be Loved by You; The Song Is Ended, but the Melody Lingers On (77.18)
CD2: Sweethearts on Parade; A Precious Little Thing Called Love; Carolina Moon; You’re the Cream in My Coffee; Love Me or Leave Me; Makin’ Whoopee!; Sleepy Valley; Button Up Your Overcoat; Marie; I’ll Get By; You Were Meant for Me; I’ll Always Be in Love With You; Honey; The Wedding of the Painted Doll; Louise; Tiptoe Through the Tulips; Mean to Me; Pagan Love Song; If I Had a Talking Picture of You; Am I Blue?; Singin’ in the Rain; Painting the Clouds With Sunshine; Piccolo Pete; Ain’t Misbehavin’; Great Day! (77.40)
Paul Whiteman, Guy Lombardo (cond); Rudy Vallee, Gene Austin, Ruth Etting, Helen Kane, James Melton (v); and others.
Retrospective RTS 4342

Hugh Rainey - 13 December 2020
Since their first and well-received album in 2016, the UK-based Dime Notes have been busy globetrotting as expert exponents of classic New Orleans style hot jazz. This second release...