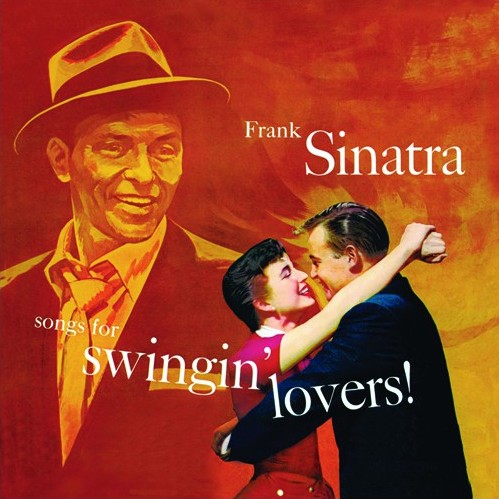 What can be said that hasn’t already been said about these two albums? In the Wee Small Hours is Sinatra’s melancholic post-Ava Gardner break up confessional; and Songs for Swinging Lovers is very definitely Sinatra back behind the driving wheel with someone other than Gardner in the passenger seat.

A.A. Gill called Lovers “the sexiest record ever made”. Both albums feature in Time Magazine 100 Best Albums of All Time. Whilst you may take such accolades with a pinch of salt there is no doubting that these are two of the finest albums recorded by Sinatra in his long career and the claims made for Lovers in particular live up to their hyperbole.

The albums also remind listeners of what a fabulous partnership Sinatra had with Nelson Riddle, whose orchestrations are simply outstanding; for me, beyond comparison. What is not to like about songs such as “In the Wee Small Hours of the Morning”, “I Get Along Without You Very Well”, “You Make Me Feel So Young”, “I’ve Got You Under My Skin” and “Makin’ Whoopee”, amongst many other classics?

I am, however, cautious about the merit of reissuing such landmark albums when the originals are so easily sourced. Both albums can be obtained on CD for as little as £0.99 on eBay.

Nevertheless, each of these contains a well-written and extended set of liner notes by Andrew Stone (as well as the originals) and extensive bonus tracks. But as these tracks were never intended to be released on the album by Sinatra and his record company (in fact many had not been recorded), it is a moot point as to whether so-called “bonus” tracks complement or dilute the original track selection. To be fair to Essential Jazz Classics, the bonus tracks actually chosen (19 across both albums) are generally sympathetic and mostly complimentary. Tracks such as “Stormy Weather”, “Young at Heart”, “Chicago” and “I Love Paris” should upset no one. I could have done without them, such are the strengths of the original albums, but I accept that there has to be a unique selling point for the market to take interest.

Regarding sound quality, the old analogue versus digital argument raises its head. As the original “mother-tape” or final mix was analogue, my guess is that vinyl would have the edge when it comes to sound. Sadly, I didn’t get the chance to compare and the 24-bit remastering of both albums has been done well enough.

Overall, there is probably enough in these reissues with booklet and bonus tracks to attract a whole new audience to some of  the greatest popular music of the 20th century.

Discography
[In the Wee Small Hours] In the Wee Small Hours of the Morning; Mood Indigo; Glad to Be Unhappy; I Get Along Without You Very Well; Deep in a Dream; I See Your Face Before Me; Can’t We Be Friends; When Your Lover Has Gone; What Is This Thing Called Love; Last Night When We Were Young; I’ll Be Around; Ill Wind; It Never Entered My Heart; Dancing on the Ceiling; I’ll Never Be the Same; This Love of Mine; Stormy Weather; I Can’t Get Started; I’ll Never Smile Again; Laura; Talk to Me; Young at Heart; From Here to Eternity; Everybody Loves Somebody (77.28)
Sinatra (v); Nelson Riddle Orchestra. Hollywood, USA, May 1953 – May 1959.
Essential Jazz Classics EJC55735

[Songs for Swinging Lovers] You Make Me Feel So Young; It Happened In Monterey; You’re Getting to Be a Habit With Me; You Brought a New Kind Of Love to Me; Too Marvelous for Words; Old Devil Moon; Pennies From Heaven; Love Is Here to Stay; I’ve Got You Under My Skin; I Thought About You; We’ll Be Together Again; Makin’ Whoopee; Swingin’ Down the Lane; Anything Goes; How About you?; Chicago; I’ve Got the World On a String; The Gal That Got Away; Learnin’ the Blues; (Love Is) The Tender Trap; You’ll Get yours; So Long, My Love; (How Little It Matters) How Little We Know; Can I Steal a Little Love; River, Stay ‘Way From My Door; I Love Paris (73.21)
Sinatra (v); Nelson Riddle Orchestra. Hollywood, USA, April 1953 – April 1960.
Essential Jazz Classics EJC55734

Steve Voce - 20 April 2022
The best-selling jazz album of all time is here expanded with four familiar tracks from previous years. The invaluable 11 minute Adderley-led Autumn Leaves is a triumph for Miles,...