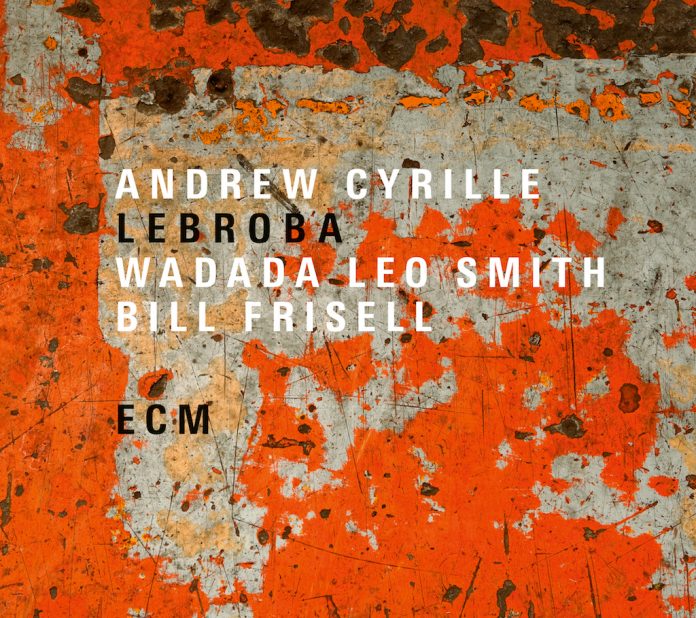 With a combined age of over 220 years, there isn’t too much that Cyrille, Frisell and Smith do not understand when it comes to the art of improvised music at the sharp end. Given the musicians’ pedigree, Lebroba will come as a surprise to many who would have expected an uncompromising improv fest. What we get is an engaging, considered session of considerable charm.

The recording appears under Cyrille’s name but this is clearly a cooperative effort with all three contributing in the compositional department. As is often the case, it is impossible to differentiate between the written and the improvised; in this case a demarcation line of no importance.

Cyrille continuously hints at time playing, rejecting the obvious accents to create rhythmic impetus, Smith constantly suggests the influence of Miles throughout, whether open horned or muted and Frisell never wastes a note, for as we have come to be aware over the years, the guitar hero stance has not been for him. The busy “TGD” is about as far out as the trio go, suggesting a freedom flight which never gets anywhere near taking us into the stratosphere and is the exception amongst the measured choices elsewhere.

Even those with no leanings towards the work of all three men, will find it hard not to warm to the bluesy atmosphere of the leader’s own title track, led by Frisell or the atmospheric ballad Pretty Beauty (also a Cyrille tune) with minimal guitar and muted subtlety from the trumpeter.

This shortish but enjoyable disc should be heard more widely than within the coterie of ECM devotees.

Ian Lomax - 25 April 2019
Jazz guitarist Bill Jennings is not a household name, even amongst jazz guitar enthusiasts like myself. Which is a pity, as the man had talent well beyond his limited...

Jazz Journal - 24 November 2021
I was present when this record was made and remember very clearly just how Muddy roused the audience that sunny afternoon from a depressed melancholy for what had happened...