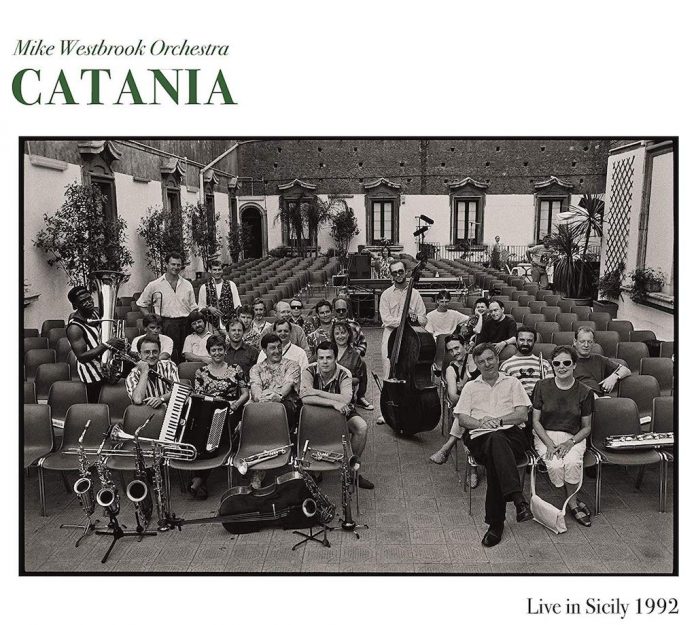 In 1992, the Mike Westbrook Orchestra was invited by Associazione Catania Jazz to feature in a three-day festival, originally to be located in the Roccanormanna di Paternò amphitheatre near Catania, on the east coast of Sicily. However, for security reasons it was moved at the last minute to the open-air terrace on the second floor of a palazzo on Via Crociferi within the heart of the city. This concert marks a renewal of Westbrook’s association with Catania Jazz which began nearly a decade previously when his Brass Band played a date at an open air concert in the Giardino Bellini. So rapturous was the applause and subsequent encores at that event that the police were called to disperse the crowd. Westbrook’s 25-piece orchestra here comprised, arguably, one of his most consistently strong line-ups. Certainly, this double CD reflects that assumption and serves both as a retrospective and vibrant snapshot of his big band.

Westbrook explains in his sleeve notes and on his website that this was nearly a record that never happened. The story is spookily similar to the 1999 reissue of Ellington at Newport which came about by a near-miraculous transformation of the original mono recording into a stereophonic wonder. For technical reasons most of the music on the Westbrook album is taken from the last night of the three-day gig. The mixing desk recording was incomplete and made on a DAT Walkman. An audience member had fortuitously made a cassette recording of the concert and another version was discovered 25 years later on reel-to-reel tape. It was largely thanks to the technological ingenuity of the late Jon Hiseman (whose studio the Westbrooks had been using in recent years) that this double CD was ever released.

Leaving aside the long (4.32) bilingual intro on CD1, this memento of the three days of the concerts given by the Westbrook Orchestra is an absolute gem. The musical content comprised Westbrook compositions spanning three decades of his illustrious career. The first three tracks (of music) – “View From the Drawbridge”, “Love and Understanding” and “Tender Love” are gleaned from the 1975 album Citadel / Room 315. Within the 18 minutes of “Love and Understanding” there’s a seven-minute tour de force solo from Alan Wakeman who positively blasts notes from his tenor. There are some incredible ensemble arrangements, replete with squealing high register trumpets, on “Factotum al Bebop” which was inspired by “Largo al Factotum” from Rossini’s The Barber of Seville. Another borrowed tune is “I.D.M.A.T.” which, as Westbrook reveals, is a deconstruction of Ellington’s “It Don’t Mean A Thing If It Ain’t Got That Swing” and features Peter Whyman on trilling soprano.

Phil Minton’s extraordinary reading of the ballad “Song of the Rain”, originally heard on Mama Chicago, demonstrates that he can handle, with aplomb, just about any vocal duties required of him. He positively excels on “I See Thy Form” which first appeared on The Westbrook Blake and his nuclear-fuelled, blues-infused vocals on “Long John Brown” are staggeringly good, and we’re treated to the full range of his trademark yodelling-embellished scat singing too. Alan Barnes can be heard executing a blistering alto solo on “South From Toulouse” and Alan Wakeman again wows the audience with a coruscating tenor solo which at times is reminiscent of those impossibly wild evocations imparted by one of Westbrook’s earliest tenor players, George Khan. Kate Westbrook is on good melodramatic form on the Brecht/Weill favourite “Surabaya Johnny” and the set concludes with a rumbustious version of “The Topers’ Rant” from The Cortege complete with the audience spontaneously joining in at its climax with handclaps and whistles of approval. If this is not Westbrook’s best album, it most certainly ranks as one of his best.

John White - 18 August 2021
Unlike his great contemporary Wes Montgomery, Grant Green (1935-1979) never received the critical recognition he deserved during his lifetime. In fact he was an accomplished guitarist who made some...