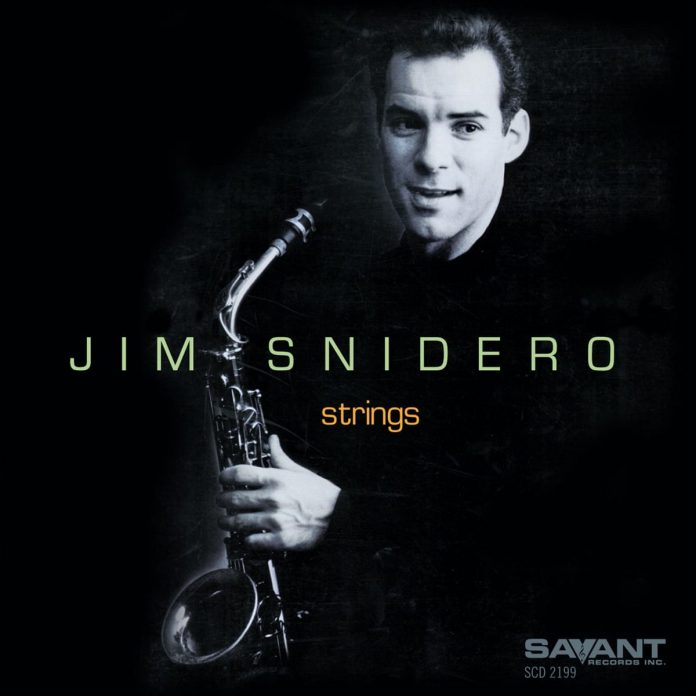 Saxophonist Jim Snidero has been releasing albums on the Savant label since 2007, so it is only fitting the re-release of Strings should appear under that imprint. It makes a reappearance 20 years after the tragic events of 9/11, a date when the original session was due to commence. The leader has been a top-class operator for many years now and probably deserves greater recognition than he has received – if only on the basis of his sheer consistency.

Historically, there are those who have always felt strings have no place in jazz, despite a number of successful collaborations over the decades from such musicians as Stan Getz and Clifford Brown – the jury being permanently out when it comes to Charlie Parker.

Snidero’s attempt to weld soloist, rhythm section and strings together should be viewed as one of the more successful attempts at amalgamation, offering some interesting charts and compositions; the strings never cloying, offering a suitable cushion for the quartet or supplying a suitable interpolation.

The leader is in buoyant form on a programme consisting of mainly ballads and mid-tempo options, in turn breezy, lively and articulate. His alto is predominant but the flute we hear circa On The Bank indicates his ability on an alternative instrument. When it comes to the ballads, his sympathy for the genre shines through as he warmly navigates his own Forever Gone or It’s The Talk Of The Town.

Pianist Rosnes gets a little solo space, we are treated to a cello/violin duet on Ventura and Feldman’s individual spot on Torrent is appropriately aggressive. But the saxophonist is clearly in charge on his own date.

Steve Voce - 06 November 2019
If you are a collector, then this is a lavish set with hardback covers and a 50-page booklet that is more suited to an elegant 10-CD box. This set...