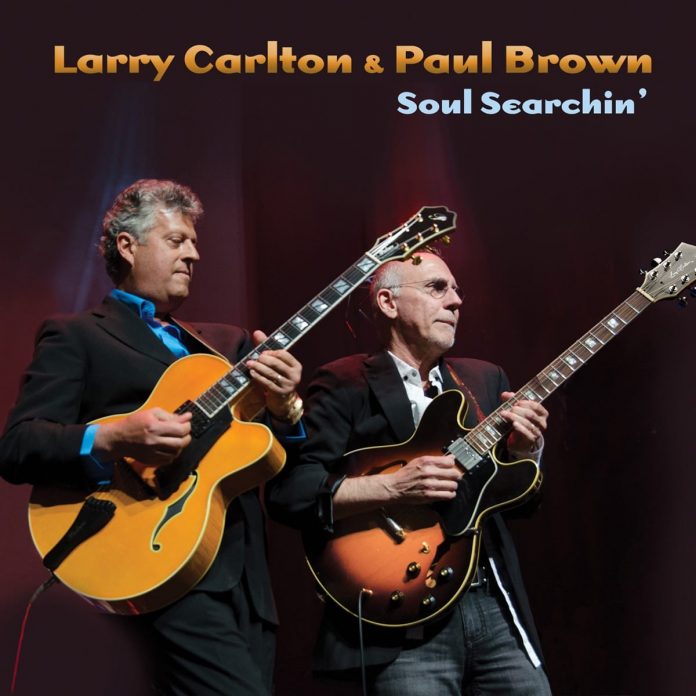 Guitarists Larry Carlton and Paul Brown both have many credits to their name, Carlton of course having been one of the key guitarists on several of Steely Dan’s most celebrated albums, and with hundreds of other appearances. Brown has been releasing his own albums since 2004, but before he then worked as an engineer for artists such as Diana Ross and Aretha Franklin, as well as twice winning Grammys for his production work.

Stylistically, Soul Searchin’ is predominantly a smooth-jazz album, with soft, glossy tracks creating the platform for the guitarists’ leading melodies and improvisation, though there are other influences that standout on the album.

Stomp and Gone Fishin’ are bluesy tracks complete with Hammond organ and horn section, and there are also grittier funk pieces like After Shock, as well as the soft-rock styled Hip Pocket, which is very reminiscent of Steely Dan.

There are a number of musicians featured on the album alongside the duo, Shane Theriot being the most prolific, playing a range of instruments such as keyboards and bass, as well as arranging most of the songs. Drummer Gorden Campbell, who has played with artists such as Earth, Wind & Fire and George Duke, appears on several of the tracks, including the laidback Say What’s On Your Mind.

Soul Searchin’ is a fairly tame album, enjoyable but likely too easy a listen for many jazz enthusiasts. Its strength is of course the musicianship, with highly polished guitar work and well-crafted songs, drawing on the two guitarists’ own musical history.

Nigel Jarrett - 01 July 2020
Father-and-son acts are rare in jazz but ought to guarantee a fair amount of familial understanding, especially when they've been going for 35 years. That's how long Norwegian pianist...