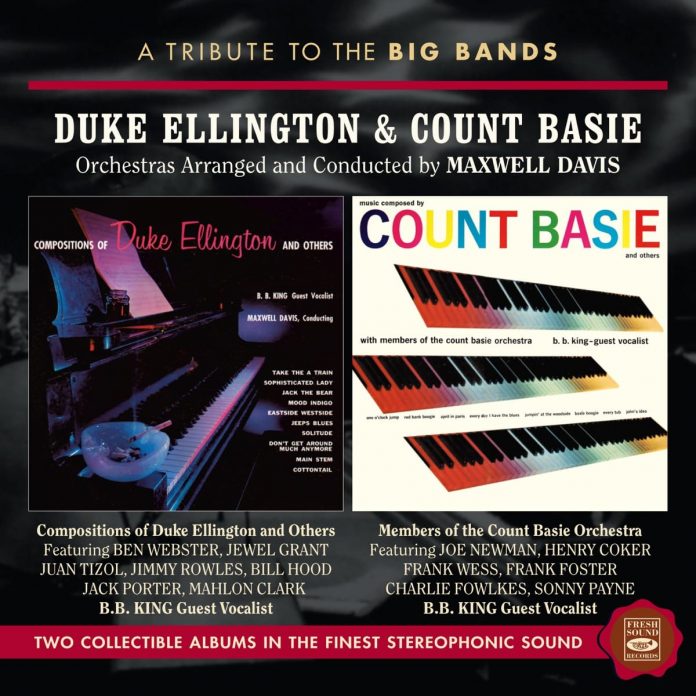 Born in Independence, Kansas in 1916, Maxwell Davis had a successful (but largely forgotten) career as an R&B saxophonist, bandleader, arranger and record producer. In 1937 he was a member of Fletcher Henderson’s orchestra and later recorded with Jay McShann. In 1944 he appeared in a Jazz At The Philharmonic concert next to fellow tenorist Illinois Jacquet. He became an arranger for several independent record labels including Aladdin, Atomic, and Swingtime. He died in Los Angeles in 1970.

In the late 1950s and early 1960s, Davis conceived making “tribute” LPs to famous big-band leaders of the swing era, including some of their prominent members, together with leading East and West Coast musicians active at the time. Not simply “carbon copies” of the original recordings, all these performances contain impressive section work and some innovative solos.

An opening “A” Train retains the flavour and tempo of the famous original, with Jake Porter (cornet) and Ray Linn (trumpet) refashioning the famous solos. Don’t Get Around Much Any More has a surprising and pleasing vocal from B.B. King. A storming Main Stem and Cotton Tail feature one of their original creators, Ben Webster, in fine fettle. He also makes a brief appearance on Jack The Bear. An always reliable Jimmy Rowles more than adequately fills the ducal piano chair, while Conte Candoli and Al Porcino play with fire and gusto. On a gentle Solitude, Bill Hood takes over Harry Carney’s role. Jeep’s Blues, the longest (4.35) track, features an impressive Jewel Grant on alto in a more than passable “imitation” of the Rabbit himself, while the well-drilled orchestra recreate the famous backdrop. The stereophonic sound is excellent, but was there really a need for these recordings when the originals could only be imitated but not bettered?

The same could be asked of the Basie “tribute”. B.B. King reprises Joe Williams’ inimitable vocal on Every Day I Have The Blues, while the band (conducted by Davis) finds and sticks to the right groove. Milt Raskin offers passable Basie impersonations on Red Bank Boogie, Woodside and Basie Boogie. April In Paris receives the “one more time … one more once” treatment. None of the soloists are identified in the (inadequate) sleeve notes, but a preponderance of Basie-ites ensure that the sound and spirit of the “Old Testament” band is preserved. The longest track is the best, with One O’Clock Jump clocking in at 5.26. An opening solo by Raskin is followed by contributions from “Franks” Foster and/or Wess, Newman and Young (at a guess), and a final extended (and exciting) ride out from the entire band – with a Basie “plink” at the end. Again, if not the equal of the originals, these copyists are well worth a listen.

Dave Gelly - 28 August 2019
The Concert Jazz Band was the culmination of Gerry Mulligan's fascination with the idea of bands that were were not-quite small and not-quite big. It began in 1949-50 with...