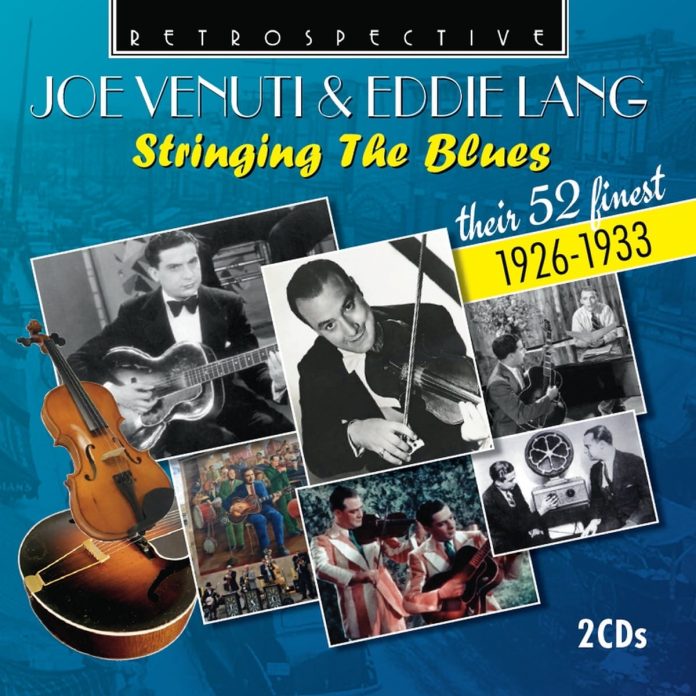 When Lang succumbed, tragically young, to complications following a tonsillectomy in 1933, the greatest musical partnership in classic jazz came to a premature end. (Though Venuti’s distinguished career would continue into the 70s.)

Their friendship and musical association had begun at school, testing ideas and playing about with classical pieces. Eddie was serious and shy, Joe an extrovert arch-prankster. Both exceptionally talented musically, they acquired high levels of technical skill through classical studies and tuition. Creative in outlook and rhythmically adept, they soon turned their attention to the developing jazz scene.

Their talent and unusually close rapport quickly earned them a place with the white, professional jazz musicians of New York in the 20s. By the time their first duo recording was made for Columbia in 1926, the opening track Black And Blue Bottom, both had worked extensively, singly and often as a duo, with top hot orchestras of the day, such as Red Nichols and Jean Goldkette. They would go on to work with numerous top names over the years, Eddie recording with Bix and Louis Armstrong, Bessie Smith and Bing Crosby.

As a duo they sounded incredibly full and inventive, swinging with impressive rapport and rhythmic momentum. With a high action on the strings and an emphatic, precise picking style, Lang produced a very full, resonant tone, varying plangent, richly chorded phrases with percussive, brightly ringing single-string runs – an innovative emphasis which would greatly influence the development of jazz guitar. Unlike Venuti, Lang had a real feeling for authentic blues, represented here in masterclass duets (as “Blind Willie Dunn”) with Lonnie Johnson on such classic recordings as Two-Tone Stomp, A Handful Of Riffs and Bullfrog Moan.

Venuti’s style is hot but with no trace of country fiddle. His swirling phrases, exuberantly creative, rhythmic and impeccably executed, stem from his classical training. (“You’ll hear Musetta’s Waltz from La Bohème in Doin’ Things” and “Wild Cat was just an exercise by Kreutzer”, Joe averred.) His spectacular playing on upbeat recordings such as Goin’ Places, The Wild Dog, Wild Cat and Raggin’ The Scale inspired jazz violinists for years to come – e.g., in the USA, Eddie South and Stuff Smith and in Europe, Grappelli with Django, and the Dane Svend Asmussen.

This two-CD set, spanning 1926-1933, contains a selection of 52 tracks, mainly small groups and mostly featuring the two recording together, often in star company. There are outstanding contributions from the versatile Adrian Rollini and Jimmy Dorsey, the Teagardens and Benny Goodman, Bix and Tram.

The notes by Steve Voce are interesting and informative. This release presents a very welcome selection of sparkling vintage “chamber jazz” of the vintage variety, grand cru throughout.