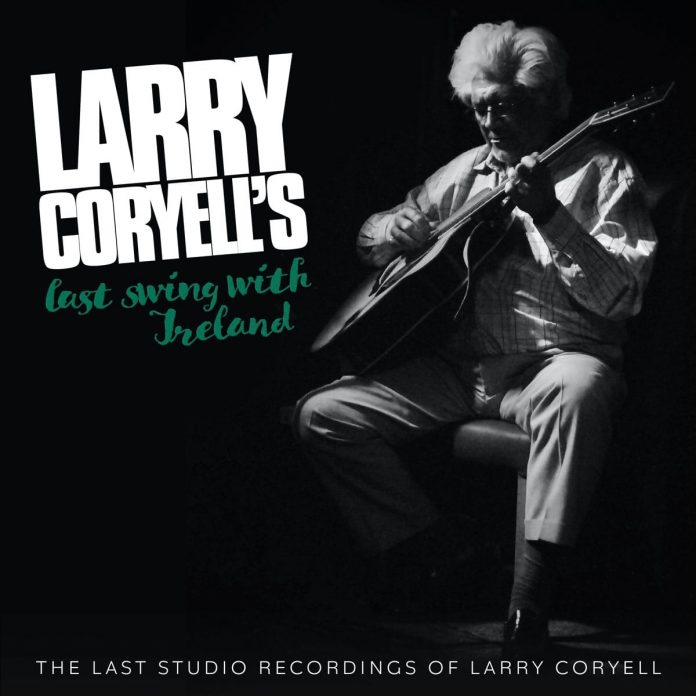 I become a little sceptical when an album appears posthumously and is billed as a “previously unreleased studio album”. To be fair this isn’t one of those releases that appears decades after an artist’s death. Coryell died in February 2017 and this album was recorded in May 2016; and there may be perfectly good reasons for the delay – licensing problems, estate permissions, post-recording production etc.

But the question that often goes through my mind is whether the artist themselves would have been happy with the release of this music and was this a session that they recorded for a future album?

Larry Coryell is one of the best-known guitarists of his era. Born Lorenz Albert Van Delinder III in Galvaston, Texas in April 1943, he started to play piano when he was four but changed to the guitar in his teens. Early influences were Kenny Burrell, Wes Montgomery, Les Paul, Barney Kessel and Tal Farlow. Coryell claimed that it was listening to the album The Incredible Jazz Guitar Of West Montgomery that changed his life. A move to New York and Mannes School Of Music introduced him to classical music, the influence of which can often be heard in Coryell’s music. Sessions with Chico Hamilton and Gary Burton followed before he joined Free Spirits – his first band to record commercially.

Coryell was clearly talented and adaptable. Given the era he was playing in it is no surprise that he found himself moving between rock and jazz. In the 1970s he formed the band Foreplay (not to be confused with the smooth-jazz band Fourplay) with his long-time friend Mike Mandel, releasing three albums which were actually credited to Coryell only. Two recordings followed with Belgian jazz guitarist Philip Catherine.

Coryell then teamed up with John McLaughlin and Paco De Lucia to form The Guitar Trio. This should have been one of the pinnacles of Coryell’s career but due to problems with drug misuse he was subsequently replaced by Al Di Meola and The Guitar Trio (without Coryell) went on later to record one of the best-known jazz guitar albums of all time.

Alcohol and drug addiction severely hampered Coryell’s career and it was some time before he was able to conquer those demons. He was a prolific recording artist up to his death but without massive commercial success. Thankfully, he also continued to tour, and his many loyal fans still appreciated his immense talent as a guitarist. Whilst recording this album in Dublin, he performed at The Sugar Club, a recording of which is due for release later in the year.

I enjoyed this album enormously. Coryell plays with clarity, sophistication and purpose. This was not an idle session, but a set played with spirit and passion. The two opening tracks – In A Sentimental Mood and Morning Of The Carnival are a delight in terms of delicacy and sophistication. It is a reminder of how good Coryell was on the acoustic guitar. The tempo picks up rapidly with Relaxin’ At The Camarillo, which features some great interplay between Coryell and Kevin Brady on drums and Dave Redmond on bass. These are musicians who are comfortable and confident with each other and that expresses itself in this upbeat and fast-paced track. The pace drops back a little with a fine version of Someday My Prince Will Come, featuring a combination of intelligent guitar and bass solos. The Last Peavey is a fusion-flavoured track featuring some strongly reverberated chords in the opening sequence followed by some aggressive lead guitar from Coryell. It sounds like Coryell was in the zone and happy just to play. 396 is the last track and continues in fusion style where Peavey left off; it features some of the best guitar playing on the album. It is also the longest track and gives plenty of scope for Brady and Redmond to shine as well.

At 45 minutes, the album is on the short side, and I would have liked to hear more. The liner notes say that the whole session was recorded in four hours, which suggests more spontaneity than repeated takes. That is not a criticism and I was not disappointed.

For a man who was to die of heart failure less than a year later there is no evidence whatsoever of any lack of musical energy or creativity. Despite my opening reticence about posthumous albums, this one is strongly recommended.

Elliot Marlow-Stevens - 16 February 2020
Beat Funktion are a Swedish jazz-funk six-piece, who, in 2014, reached No. 1 on the American and Canadian jazz charts. Here they release their seventh album, Roots. There is a...