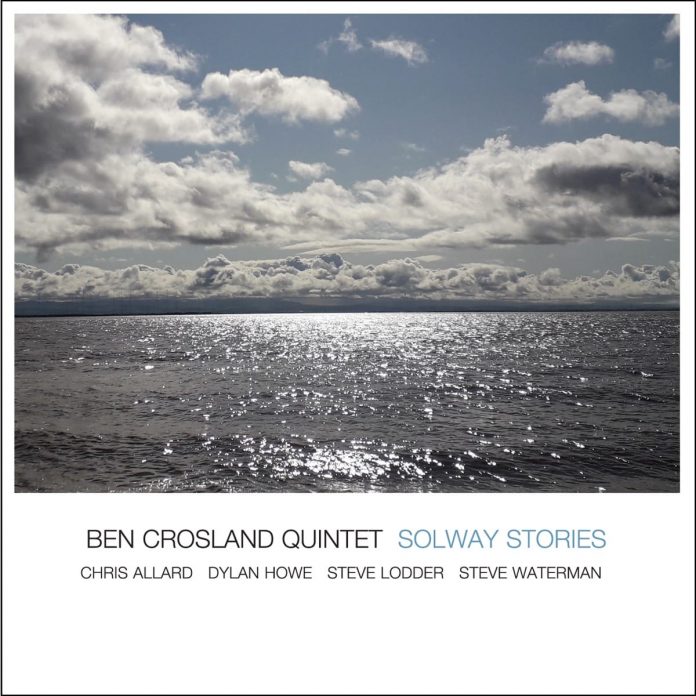 The genesis of the album extends back 30 years to the time when Crosland and his mother, holidaying in Cumbria, took a day trip to the south west of Scotland bordering the Solway Firth. Captivated by the beauty of the area and its quaintly named places such as Beeswing, Carsethorn, Islesteps and Powfoot, Crosland noted the names in anticipation of writing music based on that locale. The sheet of paper with the names on was duly filed away and then forgotten.

However, by happy chance Crosland viewed a YouTube performance by ex-Fairport Convention guitarist and singer Richard Thompson of his famous song Beeswing. This reawakened the bassist’s memory of that piece of paper which he duly retrieved and within a fortnight had composed five tunes. Over the ensuing 18 months he had completed all the tracks found on this record.

The result of this happenstance is a dozen numbers, each of which invokes a special memory of that Scottish trip and the associations it inspired. The evocatively lyrical Dulce Cor (Every Step Of The Way) is based on the legend of Sweetheart Abbey, founded in 1275 by Dervorguilla of Galloway, nicknamed Dulce Cor by its Cistercian monks because of her devotion to her late husband Sir John de Balliol. This resonated with Crosland as it reminded him of the devotion his own mother had shown, caring for her late husband who ended his days peacefully at home. Steve Waterman’s wistful flugelhorn solo here is entirely appropriate to the piece. Steve Lodder contributes an equally fine piano solo on the pastoral Islesteps.

But not all the tracks are reflectively tranquil. Cross Border Blues is a real foot-tapping swinger, underpinned by Crosland’s fluid bass lines. Another lively example is found in The Devil’s Porridge, a euphemism Arthur Conan Doyle coined for cordite used as shell propellant manufactured in a munitions factory on the banks of the Solway Firth. Replete with electric piano, lithe guitar soloing from Chris Allard and a memorable ensemble hook, this jaunty, engaging number closes a fine set.

Solway Stories is, naturally enough, dedicated to Crosland’s late mother, who passed away at nearly 102 years of age. As for the recording session, in the time of Covid, Crosland recalls that it was a memorable occasion since none of the musicians had played in a group for over five months and were “raring to go” with the collective musical energy palpable from the start. With this particular assemblage of first-rate musicians, Crosland has produced yet another winning album but this time the numbers are all his own work.