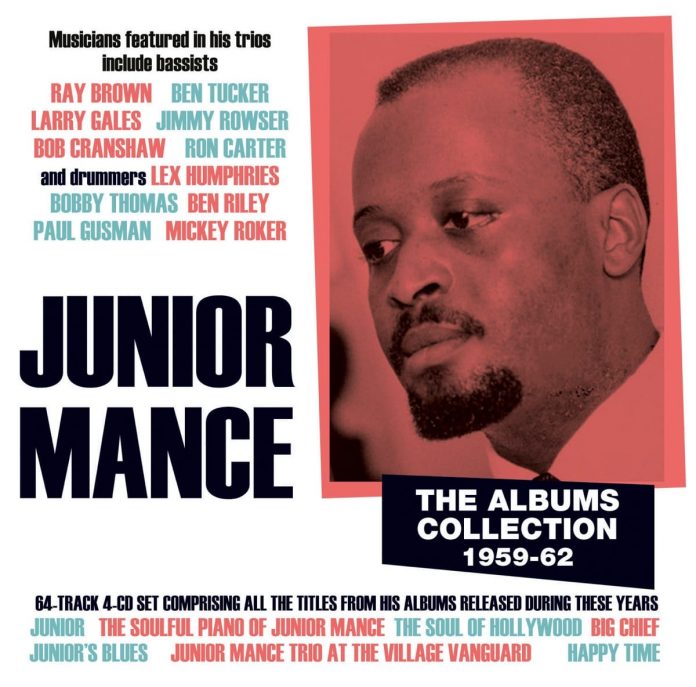 After a long and successful career which began in the bebop era, Junior Mance sadly passed away in January 2021. In timely fashion, Junior Mance: The Albums Collection 1959-62 remembers him in 64 tracks across four CDs featuring celebrated musicians such as Ray Brown, Ron Carter, Bobby Thomas and Mickey Roker.

Mance is heard during a period where he led his own trio after having success in bands with Gene Ammons, Lester Young and Dinah Washington in among being drafted for army service. The collection consists of albums recorded for Verve (Junior, The Soulful Piano Of Junior Mance, Junior Mance Trio At The Village Vanguard, Big Chief and The Soul Of Hollywood), for Jazzland (Junior’s Blues) and for Riverside (Happy Time).

The repertoire comprises songbook tunes, jazz standards composed by his peers and pieces of his own. Despite the variety of material, his soulful, bluesy style is never too far away. In 1987, Mance discussed his lifelong association with the blues, telling Newsday: “Living in Chicago, that was Bluesville. There were people around like Muddy Waters, Bo Diddley, Memphis Slim; boogie-woogie players like Jim Yancey, Meade Lux Lewis, Albert Ammons. When I was a kid, my mother loved the blues and bought nothing but blues records. When I started making gigs with horn players, I didn’t turn my back on the blues.”

On disc three, fans are welcomed to Mance’s orchestral tracks from The Soul Of Hollywood. This charming touch contrasts perfectly with the trio work which makes up most of the collection. A personal highlight is Invitation, which combines a variety of textures effortlessly whilst maintaining a steady tempo.

This would be a great starting point for any newcomer to Mance’s music, as well as a thoroughly deserved tribute to an exceptional yet often overlooked musician.

Wif Stenger - 24 March 2022
This London improv outfit is both ferocious and prolific, releasing about a dozen albums since 2017. They include several live recordings – and a rather menacing Christmas album –...