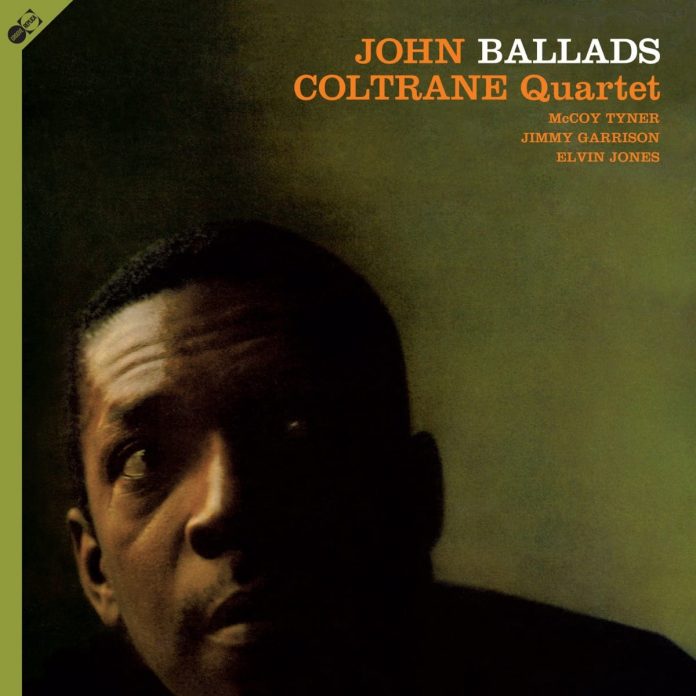 Ballads, along with Duke Ellington And John Coltrane (recorded 26 September 1962) and John Coltrane And Johnny Hartman (recorded 7 March 1963) seemed to result from producer Bob Thiele’s wish to keep the public on board at a time when Coltrane’s playing was getting more “out there”, especially when Eric Dolphy was in the band.

It appears that Trane was happy to go along with this, and it seems clear to me that, beyond wanting to counter the accusations of “non-jazz”, he was genuinely interested in the inherent qualities and possibilities of tunes like My Favorite Things, Chim Chim Cheree and the romantic standards featured here. (In 1961 he called MFT his favourite amongst all the tunes he had recorded up until that time.)

His more experimental work, including the “sheets of sound” developed in the 1950s, has tended to eclipse the fact that he was always capable of convincing blues and sensitive ballad playing. There is ample evidence of the latter here.

By the time of the Ballads sessions Coltrane was fascinated by the soprano sax and had already played it on a handful of recordings. Although he only used tenor on the tracks selected for the album, he largely stuck to the upper register, sometimes producing an almost oboe-like tone which is emotionally affecting in a different way from his more robust-sounding earlier work. Most of the performances are so tender and beautiful that they can prompt a tear, or even make you feel a bit “marsh-mallowy” inside, but there is no trace of schmaltz or insincere sentimentality.

This issue comes as a 180-gm LP with a digi-packed CD. Both discs contain Greensleeves (which does feature the soprano and was not on the original LP but was issued as a single) and the CD contains several additional performances encompassing Trane’s time with Prestige and Atlantic as well as Impulse.

These illustrate the range of his work through this period, although for anyone new to Trane’s music they serve as an intriguing sampler rather than a coherent historical synopsis since they are neither a comprehensive selection nor programmed in chronological order. A small quibble, though, and they are well-worth having. Each track has its own compelling merits, not least the superb soprano version of Ev’rytime We Say Goodbye (from the My Favorite Things album) and the tender Giant Steps version of Naima that closes the CD. The selection also reminds us what talented sidemen he worked with, even before the establishment of the “classic quartet” of Tyner, Garrison and Jones.

Handsomely packaged in a replica of the Impulse sleeve, which will look impressive propped up in the background during Zoom calls, both discs have excellent sound and the music is, of course, superb.