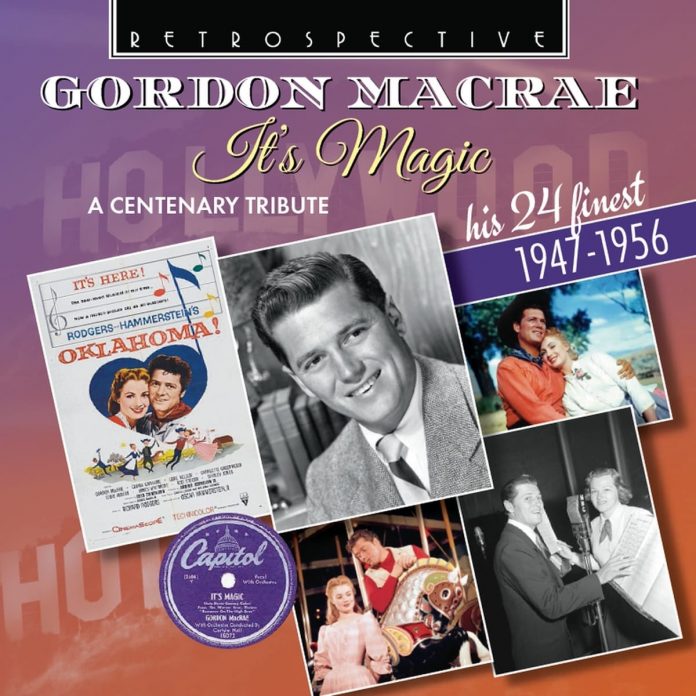 According to the length of your tooth your earliest memories of Gordon MacRae will be his performances as Curly in Oklahoma and Billy Bigelow in Carousel (both, of course, the Fox film adaptations of Rodgers and Hammerstein’s first two smash-hit Broadway shows) or the several lightweight musicals he made at Warners opposite Doris Day in the early 50s; or you may not remember him at all.

I’m taking a lot for granted here because I’m assuming you weren’t living and/or working in the USA in the 40s when you may well have heard him on radio or even seen him in non-singing roles in minor films. He first registered on UK radar in 1950 when he co-starred with Doris Day in On Moonlight Bay, one of many adaptations of Booth Tarkington’s popular Penrod stories.

There’s no doubt that his clean-cut appearance and deep-brown baritone, reminiscent of Howard Keel and Billy Eckstine, made him popular with movie-goers. The phrase “crowd-pleaser” may have been coined to describe him at that time but listening to this compilation, culled from his heyday, his limitations are exposed and only the presence of Jo Stafford – who duets with him on five of the 24 tracks – renders it palatable.

Given MacRae’s association with Doris Day it’s appropriate that the opening number, It’s Magic, is from her very first film, Romance On The High Seas. (In fact Day’s hit record of the song was so popular in the UK that the film played here as It’s Magic.) There’s a decent amount of A-list material here – Porter, Loesser, Kern, Youmans – though the A&R man who persuaded him to record Mule Train should have been fired on the spot.

If you retain fond memories of the Hokey Cokey, Hula Hoops and the Cha Cha then this may well be for you; otherwise give it a miss.

Discography
It’s Magic; You Were Meant For Me; I Still Get Jealous; At The Candlelight Cafe; Hair Of Gold, Eyes Of Blue; Say Something Sweet To Your Sweetheart*; My Darling, My Darling*; So In Love; Wunderbar*; Some Enchanted Evening; Younger Than Springtime; Lover’s Gold; Whispering Hope*; Mule Train; Dear Hearts And Gentle People; Tea For Two*; Ol’ Man River; C’Est Magnifique; Stranger In Paradise; Oh, What A Beautiful Mornin’; The Surrey With The Fringe On Top**; People Will Say We’re In Love**; If I Loved You**; Soliloquy (79.09)
MacRae (v) with various accompaniments. * duet with Jo Stafford, ** duet with Shirley Jones. Los Angeles, 1947-1956.
Retrospective RTR 4683