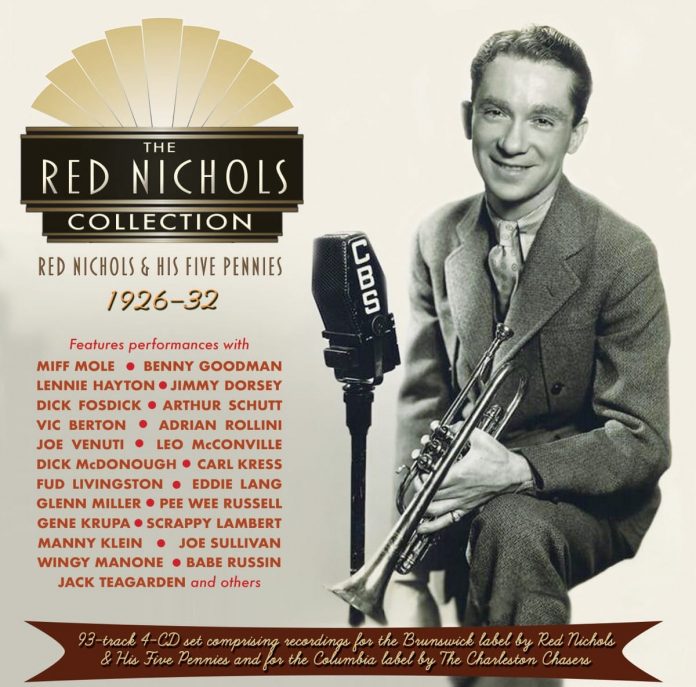 I discovered Red Nichols on a rainy, late 1970s Sunday afternoon when watching a TV repeat of The Five Pennies, the fact-based but largely fictitious 1959 Nichols biopic starring Danny Kaye. The film was lightweight, but the superb cornet parts were dubbed by Nichols himself, and I soon acquainted myself with the hot-jazz veteran via early volumes of Stan and Steve Hester’s fabulous Classic Jazz Masters series from Mole Jazz record shop at London’s King’s Cross.

Nichols recorded thousands of sides under more than a dozen names for myriad record labels. For those unable to find or afford the three-volume, nine-CD, 124-track The Complete Brunswick Recordings Of Red Nichols, released by Jazz Oracle in 2011, this thoughtfully compiled four-CD set from Acrobat is a superb, slimmed-down collection that offers a great overview of Nichols’ work for Brunswick in his musical heyday.

Often unfairly written off as a Beiderbecke imitator, Nichols was a fine cornet player, writer and arranger who could both improvise and read music. Having cut his teeth with, among others, The Syncopating Five, Sam Lanin, The Original Memphis Five and Roger Wolfe Kahn, in 1926 he formed his own band The Five Pennies which, despite the name, could include up to 12 or even 15 players.

The later 1920s and early 1930s saw forays into more commercial material such as Who Cares, China Boy, Corrine Corrina, You Rascal You and the novelty piece The Peanut Vendor. Nichols expanded the band, working with dozens of names which would later become giants of swing, including Benny Goodman, Gene Krupa and, following Mole’s 1929 departure, Jack Teagarden and Glenn Miller on trombone. These tunes from discs three and four may not be as earthy or essential as the earlier 20s cuts, but they are fine jazz recordings.

The Great Depression, coupled with his struggle to adapt to the new swing movement, forced Nichols to leave recording for work with Broadway orchestra pits or other bands. The 1950s Dixieland revival saw him return to jazz with radio, record, film and TV appearances and ongoing live engagements before his sudden demise in 1965.

Uncluttered by endless redundant alternate takes, this is a wonderful document of Nichols’ ensemble work over the specified period, and also features 11 tracks for Columbia by Pennies alter egos The Charleston Chasers. It is immaculately presented with a fully annotated discography and a detailed biography. Highly recommended.

Peter Gamble - 11 October 2021
The original UK vinyl release of this album on the Verve label (VLP 9125) was in 1966, sporting a compilation of tracks taken from the substantial discography O'Day had...