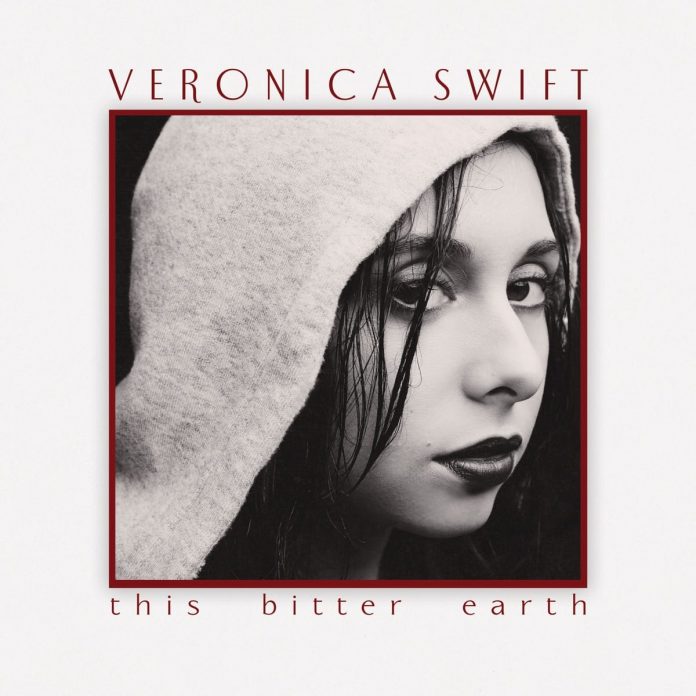 That Veronica Swift should have embarked upon a jazz singing career is not surprising as she is the daughter of pianist Hod O’Brien and singer Stephanie Nakasian, the latter also being a highly-respected singing teacher. As she entered her teens Swift recorded her first album; at the end of them she won second place in the Thelonious Monk Institute Vocals Competition.

Since then, Swift, who will be 27 in May, has attracted appreciative attention through her work with Wynton Marsalis and the Jazz at Lincoln Center Orchestra as well as appearances at leading New York jazz spots and, of course, her albums.

Swift’s strong voice is mature beyond her years and she delivers her interpretations of lyrics with considerable authority. Her repertoire here includes well-known songs from stage and screen musicals as well as several good but not over-used songs from earlier years, including Bob Dorough’s You’re The Dangerous Type, Clyde Otis’s This Bitter Earth, Robert and Richard Sherman’s Trust In Me and Russ Columbo-Clarence Gaskill-Leo Robin’s Prisoner Of Love.

Mostly, Swift is supported by the core trio of piano, bass and drums, but good use is also made of the string quartet on four tracks and reed player Aaron Johnson on two. Armand Hirsch appears on two tracks, on one of which – Carole King-Gerry Goffin’s He Hit Me (And It Felt Like A Kiss) – he is the sole accompanist playing acoustic guitar. Although it is presented with its original (presumed) ironic intent, this song is a surprising choice given that its title, lyric and inspiration centre on domestic abuse, a present-day subject of acute concern.

On the final track, Amanda Palmer’s Sing, the accompaniment, arranged and conducted by Steven Feifke, is briefly swelled by choirs from two schools. Nothing more than an uninformed guess, but the unusual ensemble on this track might reflect the fact that the singer’s mother is the author of It’s Not On The Page! How To Integrate Jazz & Jazz Rhythm Into Choral & Solo Repertoire.

In late 2019, I reviewed Swift’s Confessions (Mack Avenue MAC1149) and was deeply impressed. Since then, she has grown even more. Without doubt, as a jazz singer Veronica Swift is the real deal and this album is very warmly recommended.

Discography
This Bitter Earth; How Lovely To Be A Woman; You’ve Got To Be Carefully Taught; Getting To Know You; The Man I Love; You’re The Dangerous Type; Trust In Me; He Hit Me (And It Felt Like A Kiss); As Long As He Needs Me; Everybody Has The Right To Be Wrong; Prisoner Of Love; The Sports Page; Sing (61.15)
Swift (v) with, collectively, Emmet Cohen (p, cel); Yasushi Nakamura (b); Bryan Carter (d); Aaron Johnson (as, f, bf); Armand Hirsch (g, elg); Lavinia Pavlish, Meitar Forkosh (vn); Andrew Griffin (vla); Susan D. Mandel (clo); Steven Feifke, Ryan Paternite, Wilf Wakefield (v). NYC. 2020.
Mack Avenue Records MAC1177