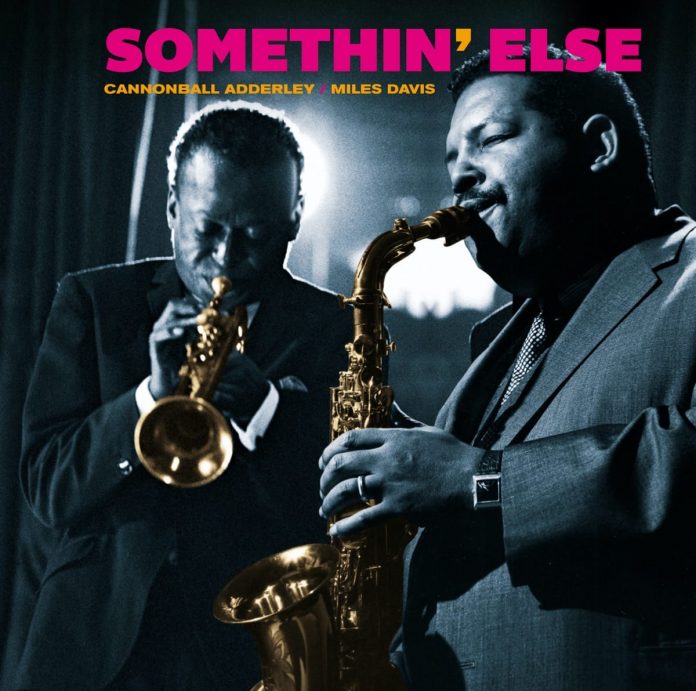 Widely regarded as a seminal recording of the 1950s, Somethin’ Else featured Cannonball (as leader) renewing a partnership with Miles that had earlier produced two other classic albums: Milestones and Kind Of Blue. This reissue, with an “appreciation” by Brian Morton, and a brief notice from Jazz Magazine, together with the original liner notes by Leonard Feather, enhance an attractive compilation.

Every track is superb, but the honours probably go to an extended and haunting performance of Autumn Leaves (adopting Ahmad Jamal’s written introduction), with Cannon and Miles despite – or because of – their contrasting styles, striking sparks off each other, with the unflagging support of Hank and Sam Jones, plus the indefatigable Art Blakey. Leonard Feather praised its “mood of restrained exultancy, a low-glowing Davis fire that burns contemplatively until stirred to even greater warmth by the embers of Adderley’s stimulation.”

Love For Sale is equally memorable, with a tightly muted Miles introducing the melody, immediately followed by a righteously wailing Cannon. As Brian Morton aptly comments, throughout the entire proceedings “Adderley’s vitalism is the perfect foil to Miles’s narrowed-eyed lyricism.” With Miles sitting out, Dancing In The Dark is a showcase for Adderley’s already passionate yet sophisticated sound. If you don’t already have this seminal session, get it immediately.

You will also receive six “bonus” tracks – which in their initial appearance comprised a lesser-known (but rewarding) album – Portrait Of Cannonball – his first recording for Riverside. Curiously, the compilers of this reissue offer only the original but now “dated” liner notes written by Orrin Keepnews in 1958, which focus on the respective early careers of “Julian” Adderley and trumpeter Blue Mitchell, to the neglect of the six titles on Portrait. While not up to the incandescent quality of Somethin’ Else, they are of more than passing interest. Mitchell, at the beginning of a distinguished career, fits perfectly into the integrated ensemble, and is particularly notable on Straight Life and A Little Taste (both Adderley originals). Bill Evans and Philly Joe are heard to advantage on the Gigi Gryce composition Minority. The Rodgers and Hammerstein hit People Will Say We’re In Love receives a gently swinging treatment from both horn men, while the bespoke rhythm section provides nuanced support for the principals on all tracks. Philly Joe contributes a long and well-structured solo on People Will Say, while Nardis (a Miles Davis composition) receives a stately unison opening before sensitive contributions from Cannon and Blue.

This is a well-packaged set and the informative sleeve notes (suspend disbelief) are actually legible.