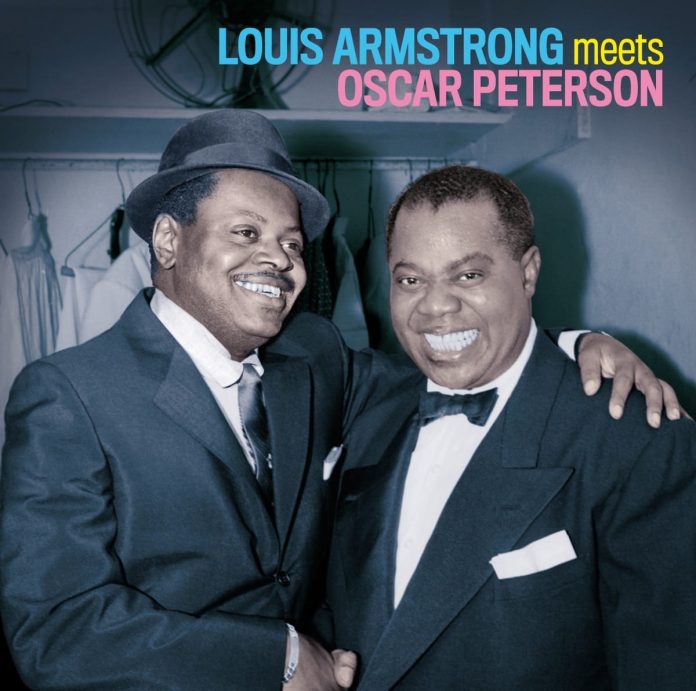 Peterson recorded prolifically in the 50s, sponsored and encouraged by impresario Norman Granz. On Jazz At The Phil recordings he worked extensively with the top jazz stars of the day, and with his own world-class trio or quartet he embarked on a journey through the master works of the great popular American composers in his songbook series.

He also recorded a string of albums featuring invited jazz celebrity guests, and in this context eventually met up on this session with the legendary grand master, Louis Armstrong. (Actually they had already met, and hit it off, on the Ella/Louis recordings.) A clear policy for this memorable collaboration was agreed on, with no hint of any JATP-style jousting. Armstrong’s standard All Stars Dixieland repertoire was jettisoned for top-quality popular songs typical of a Peterson album.

Louis sounds confident, relaxed and enjoying the change – not to mention the Rolls Royce backing of probably the best rhythm section in the world. His vocals dominate every track throughout, and introduce all but two of the 16 songs. Less featured, his unmistakable majestic trumpet nevertheless contributes powerfully on eight tracks, the famous chops assertive in high register in an exuberant Let’s Fall In Love, and going for an extra chorus in Moon Song.

Oscar and his talented group swing effortlessly behind him with rich harmonic fullness, the elegant fills imparting an appealing blue tinge to tracks such as Blues In The Night, Sweet Lorraine and Willow Weep For Me. Though an inspired soloist, with exceptional technique and compelling ideas, Oscar was also the finest and most responsive of accompanists, and doesn’t take a single solo on the album, outside intros and brief bridges. In a single, brief duet, There’s No You, Louis is backed by just guitarist Herb Ellis.

Louis totally immerses the songs in his own musical persona, as he always did, developing the emotional impact of the lyrics, and refreshing the melody line with magical adjustments of timing, the hallmark of a great jazz musician. Whether exuberantly upbeat, or ruefully reflective, his total commitment and instinctive artistry bring every song to fresh life. The famously gruff, amiable, informal singing style masks uniquely effective vocal skills. An intensely moving How Long Has This Been Going On could only have been equalled by Billie.

Four bonus tracks from three months earlier, including an over-lengthy Let’s Do It, are added for extra value to the original LP album. Altogether a highly enjoyable reminder of the exceptional talents of these giants of jazz.

Garry Booth - 09 July 2020
This reissue of Jon Hassell’s 1977 debut album was very timely. It came just as the veteran experimentalist is having a serious health crisis back home in the US,...