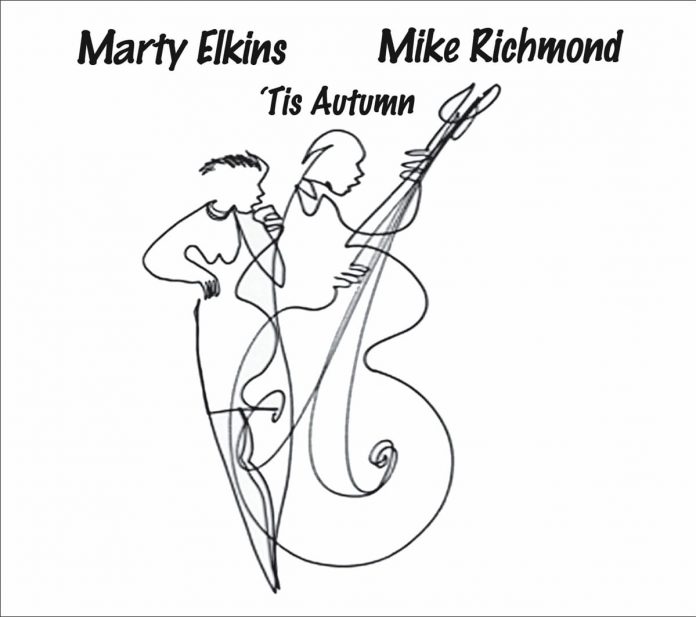 Born in New Jersey Marty Elkins began working in Boston performing material associated with the Andrews Sisters. Her 1988 debut album was a duo recording with Dave McKenna (Nigel-Heyer CD114). (Ella Fitzgerald’s 1955 Do Nothin’ ’Till You Hear From Me with Ellis Larkins was a similar highly successful bare-bones affair.)

On this, her fifth CD, Ms Elkins is back in a duo setting, this time with the virtuoso bass player Mike Richmond. Her repertoire here comes from the golden age of popular music from Honeysuckle Rose (1929) to Old Devil Moon (1947) and is perfectly suited to her intimate delivery.

Her contralto, with its rich timbre, perfect diction and delicate vibrato, occasionally calls Lee Wiley and Chris Connor to mind. She handles difficult material like ’Tis Autumn (popularised by Nat “King” Cole) with aplomb and really lets her hair down on swingers like In A Mellow Tone, Lullaby Of The Leaves and Honeysuckle Rose. These titles also feature melodic scat choruses quite unlike the pyrotechnical displays of an Ella or Anita O’Day but are just as musical. She gets a suitably down-home feel on I Ain’t Got Nothin’ But The Blues which is a 32-bar AABA form and not really a blues at all.

Mike Richmond, with his huge sound, is a tower of strength throughout whether on his 170-year-old Tyrolean bass or on his 120-year-old cello.

Simon Adams - 07 March 2019
Trumpeter Ralph Alessi’s first ECM quartet album, Baida (2013) was a beautiful but tentative affair, his second Quiver (2016) more assured. But both felt as if he was slightly...

Jazz Journal - 31 March 2021
It's been several years since Scot­land's answer to Wes Montgom­ery led a record date, but the enterprising new specialist guitar label Six Strings has given Mul­len a platform on...