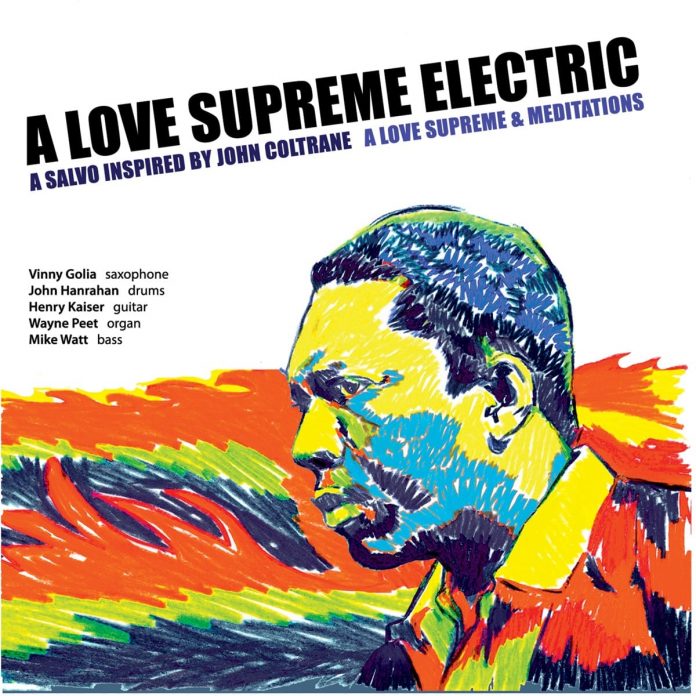 John Coltrane’s A Love Supreme is one of the unassailable heights of jazz, revered for its spiritual intensity and incantatory devotion but rarely played in whole or in part by any of Coltrane’s many disciples. It is almost sacrilegious to touch it, let alone to rework it in a new form, so it takes a brave man to attempt this most difficult of challenges. But guitarist Henry Kaiser has form in this field, having previously tackled Miles Davis’s 1970s’ electric work on the three Yo Miles! projects with trumpeter Leo Wadada Smith.

In his reworking of A Love Supreme, and combining it with the equally reverential Meditations, Kaiser, alongside co-conspirators reedsman Vinny Golia, organist Wayne Peet, bassist Mike Watt, and drummer John Hanrahan, has delivered “a salvo inspired by John Coltrane”, an electric assault on two great acoustic pieces.

The reason for combining both pieces was the result of Kaiser posing the question: “What if A Love Supreme and Meditations are two parts of one single expression of an ecstatic spiritual state?” He noted that “Coltrane intended his Meditations suite to be a spiritual sequel to his A Love Supreme suite” and found that the two fitted very well together when played live, as “all the individual sections inform, deepen, cross-reference, and expand on one another, in both the musical and spiritual domains.”

The reverberating gong that announces the opening Acknowledgment section of A Love Supreme and then Vinny Golia’s call to devotion and the four-note repetitive bass motif are all as the original, suggesting that what follows will be a close copy. But then Peet’s pulsating Hammond organ and, most overtly, Kaiser’s distorted electric guitar take us to another place altogether.

Of the five musicians, it is of course Kaiser who is most out of place, there being no room for a guitar of any complexion in the original quartet line-up. Perhaps it is best to think of him as an Archie Shepp, who guested with the original quartet on two alternate takes when the original album was recorded in December 1964, or more likely a Pharoah Sanders in full flight when Coltrane’s classic quartet became a quintet.

It is Kaiser who most transforms this work into something in its own right, not just a modern replica of a much-loved original. He is not afraid to cut loose, adding a wild urgency to what is in reality an often quite staid standard. Hanrahan, too, is bravely more tumultuous and rock-orientated than Elvin Jones ever was, although Golia usually sticks close to Coltrane’s sentiments. That said, the concluding Psalm is truly transformative, its pent-up fervour delivered by five musicians all in search of a new experience, while the reprise of Acknowledgement is a wonderfully louche, compelling finale.

Interestingly, of the two pieces, it is the usually overshadowed Meditations that most impresses, perhaps because the original is lesser known. The version of Meditations recorded in November 1965 of course featured Pharoah Sanders, as well as extra drummer Rashied Ali, and its treatment here is much closer to fire music than meditative spirituality. The opening Father, Son et al produces some of the most out playing on the entire album, Compassion is a collective cacophony, Love a Hammond-driven frenzied boogaloo, Serenity initially a pizzicato conversation, and Joy – not on either released version of Meditations but later reworked by Alice Coltrane – a trippy showpiece for Mike Watt’s deep-throated bass and then Peet’s shimmering Yamaha organ as Kaiser bends and slurs overhead. All added together, and perhaps without the over-familiarity of the original ringing in our ears, this electric Meditations achieves its own very individual grandeur.

Some with more tender ears will no doubt recoil in horror at the impertinence of these five musicians in attacking such revered classics. Others, however, will recognise this set as a substantial achievement, both a worthy homage but also an electric updating that delivers new visions of past glories.

Steve Voce - 16 March 2020
The big-band leaders tended to have long contracts with their record labels – Ellington with RCA, Basie with Columbia and Kenton with Capitol. Woody Herman, who signed with Decca...