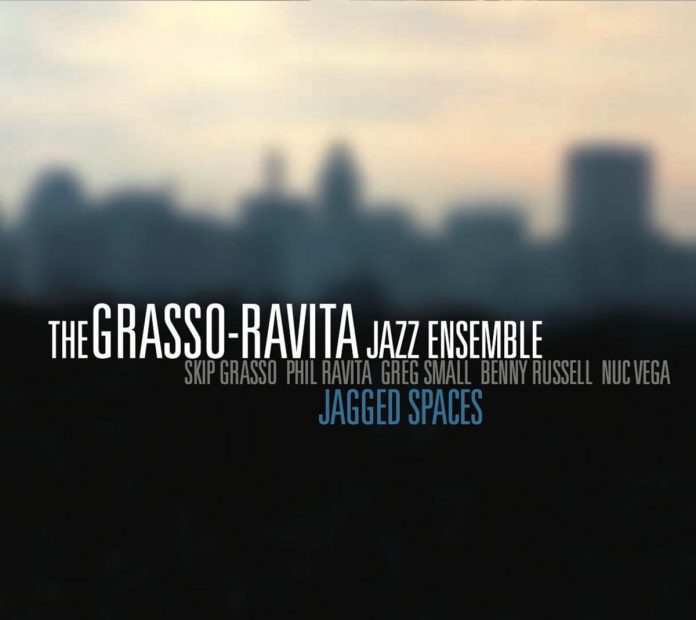 Is a jazz quintet an ensemble when it favours cooperation over solos? Maybe “ensemble” is just a posh description, or a bandleader’s attempt at raising a listener’s expectations. In any event, the Grasso-Ravita band are half-hearted as both a collective and a fivesome. The arrangements are conventional and the playing too often undistinguished.

From the outset things don’t seem to gel. Jagged Spaces the tune, by guitarist Skip Grasso, is a starburst of leaping intervals and the soloists seem unable to get a handle on its complexity; they wrestle with it rather than springboard off it. Grasso’s waltz tune, Her Life Incomplete, has a counter-productive four-four feel not helped by drummer Nuc Vega; Grasso’s “moving” coda, written to finalise the chart and have it coincide with memories of a friend who died too young, is unremarkable though no doubt sincere.

Co-leader Grasso supplies four of the nine compositions and his harnessed colleague, bassist Phil Ravita, two. Saxophonist Benny Russell is responsible for a couple, which appeared on his solo album Proverbs (Airmen Records, 1994), and pianist Greg Small one. Russell’s All About Cynthia, dedicated to his wife, is one of the album’s tunes which might have improved with a little more attention to form and a little less of him. On Blue Sunshine he falls back on space-filler licks – as he does on Songhai, his other composition – and before handing over to pianist Greg Small has done his stint. Elsewhere, Small’s sometimes heavy-handed comping grates. The bossa of Latin For Leandro, Grasso’s tribute to Mexican composer Espinosa, lacks the necessary glow and simmer associated with south of the border.

Many albums have their low points but this one has too many, despite the band members’ experience and individual musicianship. Tighter arrangements and stronger evidence that the five musicians belong naturally together would have helped.

Andy Hamilton - 17 October 2021
Now 81, Andrew Cyrille is best known as the drummer on some of Cecil Taylor’s greatest performances – he worked with him for more than a decade from 1965....