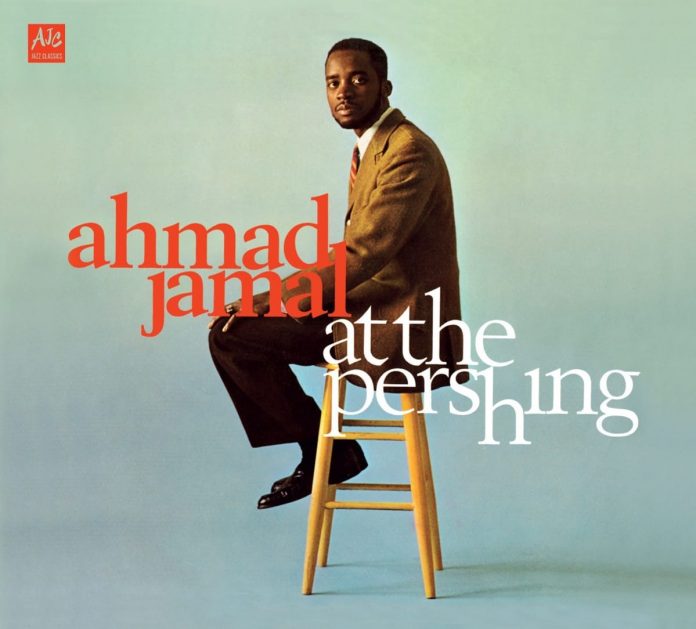 What more is there still to say about this magnificent music, given the fact that in November 2015, July 2019, and again in September last year John White reviewed this same live set, as it reappeared in part or in whole on three different labels, in this same publication? [Not to forget Gerald Lascelles in JJ July 1959 – Ed]

Now it is making yet another appearance, this time digitally remastered under the aegis of American Jazz Classics, which gives this new reissue some stamp of authority. These famous Pershing tracks have certainly earned their right to survive, but it is still worth recalling just how important this music actually is.

The Ahmad Jamal trio’s appearance at the Pershing Lounge in Chicago in January 1958 created something of a musical phenomenon at the time, establishing Jamal firmly in the league of big-time jazz performers. But Not For Me, the live album that contains the first eight of the tracks listed below, quickly climbed to number three in the Billboard Hot 100 and stayed in the chart for more than two years. Its successor, Jamal At The Pershing, which appeared in 1960 and contains the remaining 11 tunes, continued to raise the profile of its performers.

This new compilation helpfully contains a condensed single version of Poinciana and its original drum-less studio version recorded back in 1955 in New York with Ray Crawford on guitar. It thus makes available all of the extant recordings from the Pershing: although the trio in fact played 43 different tunes over the course of two nights, sadly only 19 have survived.

The set list itself is surprisingly mainstream, with a fairly predictable choice of standards, although at often surprisingly different tempi than usual, a single nod to more modern tastes in Dizzy Gillespie’s Woody ’n’ You, a quick take of Music! Music! Music!, a pop song made popular by Teresa Brewer in 1949, and no originals by Jamal.

But it is not the compositions that matter, rather what Jamal and his trio do with them. Jamal’s touch is light and easy, his melodic statements calligraphic and precise rather than effusive, his use of space a defining feature. Israel Crosby and Vernell Fournier both motor with intent, Crosby’s walking bass lines in particular a joy to hear, Fournier’s varied drum strokes always entertaining. Together they fly effortlessly from song to song.

There is no need for me to say more, as this music speaks for itself. Five stars of course, just as every critic before me has awarded them!