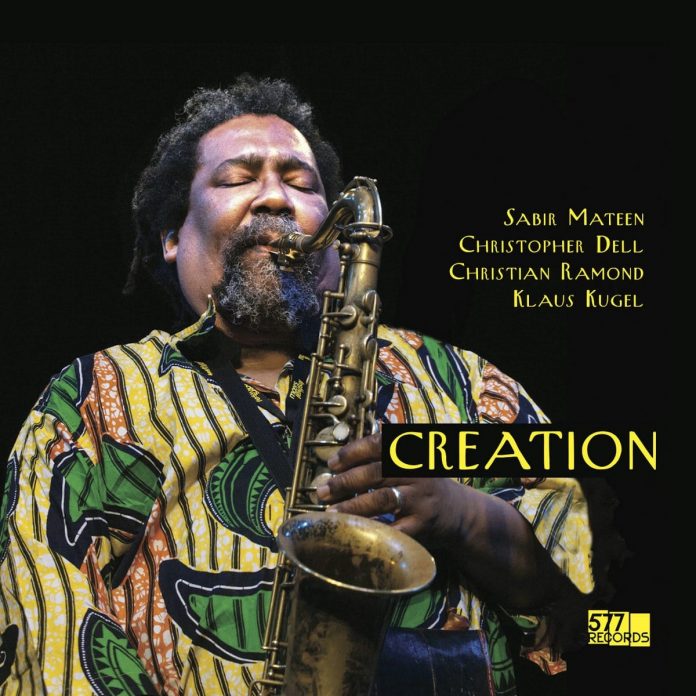 Creation, containing two tracks, the second of which is double the length of the first, presents 47 minutes of fully improvised free jazz from a live performance in Berlin. All the musicians, aside from New Yorker Sabir Mateen, are German and Klaus Kugel and Christian Ramond have been bandmates since the late 1980s.

Thanks to their experience together (and presumably now synchronised thinking), Kugel and Ramond are able to create the momentum required to push free jazz forward, given that a beat in this kind of music is usually optional.

Creation (Part One) is always moving, fuelled by Ramond’s rapid and skittish drumming, interwoven with Christopher Dell’s vibraphone additions; this combination creates quite a tense setting, cut open by Mateen’s raw, splintered background lines. Beauty is found in a quieter interlude with some exquisite bass playing accompanied by some light drums and a glistening vibraphone solo.

The second track, Creation (Part Two), purveys harsher tones and occasional high-pitched sounds which unite in flurries of notes, all equating to an ever-evolving soundscape. Additionally, this track is home to Mateen’s spoken scat-like singing which punctures the layer of sound, subsequently followed by his commanding and authoritative saxophone playing. Mateen’s skill as a saxophonist is highlighted in the calmer passage of this track where the rhythm trio traverse a challenging section and Mateen glides along a melodic line in a comprehensible fashion.

The colour and contrast in this album is maintained by Dell’s playing on the vibraphone; it shines through in both his solo sections as well as his background playing. Unfortunately, the tenor saxophone can sometimes dominate too much, obscuring the beauty in Dell’s complex and delicate touches. Aside from these overbearing moments, Mateen’s playing is fearless, virtuosic and intricate, appropriately described as the “wildcard” in the album’s coversheet.

Jeremy Isaac - 17 April 2022
This attractively packaged, 26-track compilation of late-era recordings from the Belgian, French and Roma guitar genius makes a fine introduction for those not acquainted with his latterday career. However,...