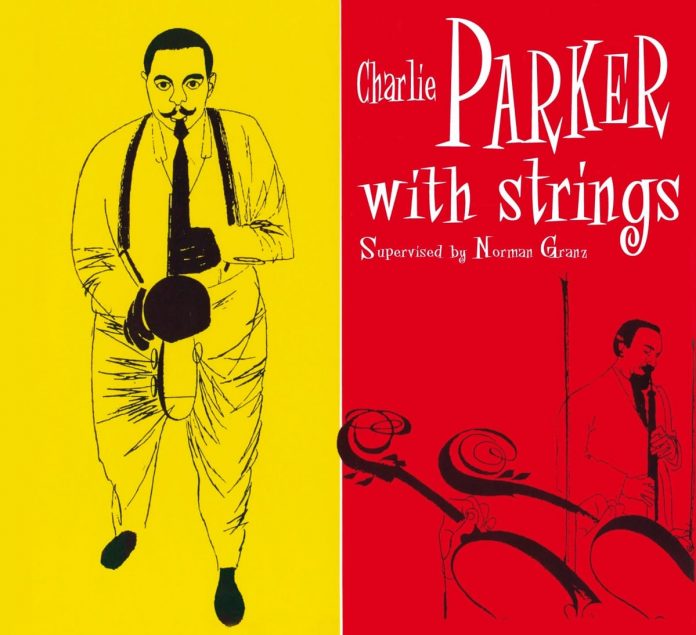 Although Dizzy Gillespie was the first bop musician to record with strings, in 1946, it was Parker’s two 10″ LPs that caught the public’s attention and, indeed, started a trend with leading soloists to use the format. Arguably only Clifford Brown and Billie Holiday produced memorable with-strings discs later but these releases by Charlie Parker were well received.

The version of Just Friends that begins this selection became Parker’s best-selling record of all time. It was the first six tracks heard here that came out first and a second 10″ LP followed later with the next eight tracks. Parker sounds just a little tentative on the first six or seven pieces but there is no denying the skilled invention of his improvised choruses or the beauty of his alto sound heard here.

The strings provide a lush background, and the rhythm is in the capable hands of Ray Brown on bass and Buddy Rich on drums. It is reported that Parker felt overwhelmed at first by the musicians playing with him and felt that he was inadequate. The classical musicians were, in their turn, amazed by Bird’s ability to improvise so inventively on the familiar ballads.

At any rate, once settled in, Parker was able to come up with fresh, invigorating variations of items like Laura, Out Of Nowhere, East Of The Sun and others that he had been playing regularly in quintet format in the clubs and on records, for years. His alto swoops and soars over these melodies and mints fresh melodies on them all. And the strings flow along smoothly, courtesy of Brown and Rich.

Swinging even harder, the live recordings from Carnegie Hall benefit from an ideal rhythm section for Parker, comprising Al Haig, Tommy Potter and Roy Haynes. Parker is even more inventive and obviously completely at ease in this setting, now full of confidence and revelling in playing in front of a large audience. April In Paris and Easy To Love are standout tracks and he excels on a fresh arrangement of Rocker, first heard on Miles Davis’ Birth Of The cool session. which Norman Granz had commissioned from composer Gerry Mulligan.

The final section of tunes has Parker surrounded by a big band with horns and strings and this compilation also includes a rare alternate take of Laura from the first LP. This is the complete “Charlie Parker With Strings”.