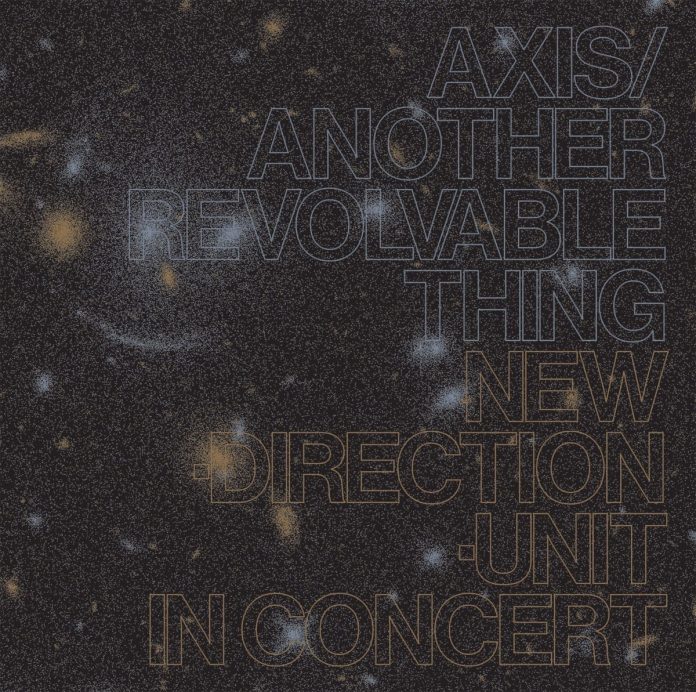 Blank Forms releases Masayuki Takayangi’s New Direction Unit album Axis/Another Revolvable Thing, the second release of his recordings on the label. This album was recorded the same year and location as the first release, April Is The Cruellest Month, in Tokyo, 1975, several months later on 5 September. The line up is the same, with the quartet formed of Takayanagi on guitar, Kenji Mori on woodwind, Nobuyoshi Ino on bass and cello, and Hiroshi Yamazaki on a variety of percussion, including drum kit.

I reviewed April Is The Cruellest Month in 2019 and my overall sentiment still stands. This is not for the faint of heart. In actual fact, this particular live performance lulls you into a false sense of security. The album is divided into a series of “fragments”, titled I to VI, which are themselves split between the first two, named Gradually Projection, and the final four, named Mass Projection, with the spacious and expressive Fragment III (Percussion Solo) between them.

On the first two tracks, Takatangi pinches and grinds his nylon-string guitar, while the rest of the band slowly but surely increase the energy, as the sporadic drumming builds in intensity. While still fully improvised, it has less of the industrial noise of the debut album, and instead focuses on an acoustic instrumentation, offering a more organic sound, aided by the natural reverb of the live recording coupled with the audience’s applause. The second track drops in aggression significantly, with much more empty space between the cymbal crashes and guitar scraping. This, however, is not to last.

After Hiroshi Yamazaki’s percussion solo, the band slowly but surely head toward a full crescendo of free improvisation. By the final track, Fragment VI, the full drum-kit-falling-down-the-stairs experience is achieved, while the rest of the band veer off in their own musical directions. The musicianship and the pushing of instruments to their absolute limit is both engaging and interesting, and the atmosphere of dissonance does give way to captivating harmonic moments.

This music was originally been released as two separate LPs, with the performance split across the two. Blank Forms have re-released both, as well as combining them for CD, rearranged in chronological order. This is avant-garde in the proper sense, residing at the limits of music, although of course, for some, that is its appeal.

Bruce Crowther - 17 August 2020
A singer whose repertoire and style was mostly suited to the pop music of the day, Lynn Taylor (1937-1979) worked for a while in New York City where she...

Jazz Journal - 24 January 2022
This is one of a series of taped interviews with musicians, who are asked to give a snap opinion on a set of records played to them. Although no...