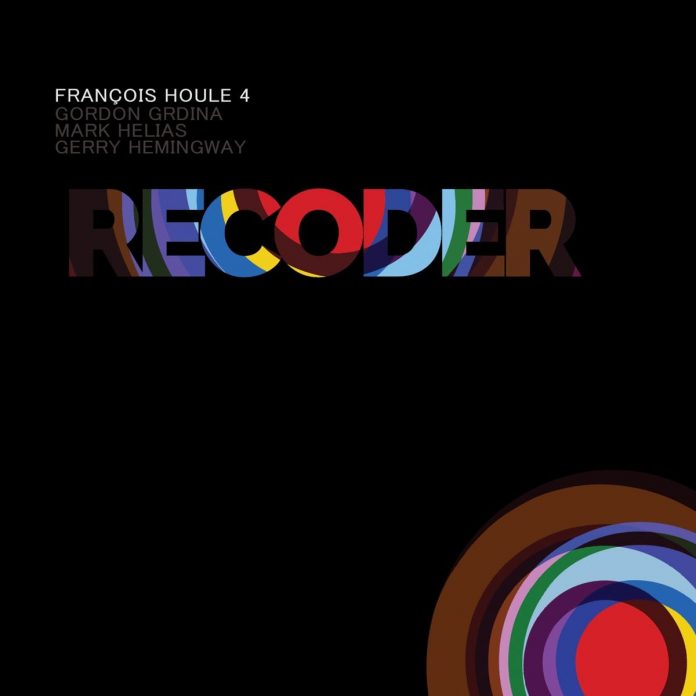 Classically trained and a former student of the late Steve Lacy, François Houle comfortably straddles the fields of jazz, improvisation and new music. The stellar band assembled for Recoder were chosen by what he describes as a process of “casting”. Grdina has been a collaborator for over a decade now and brings a vast array of sonic and textural possibilities. Helias and Hemingway need little introduction, and the propulsive free-bop of their long-running BassDrumBone trio with Ray Anderson was an important touchstone for this project.

Perhaps a more surprising inspiration for Recoder is Miroslav Vitous’s 2003 ECM album Universal Syncopations. Houle studied the album following Hemingway’s recommendation, and what he heard was an exemplar of a particular approach to composition. With the exception of the Prelude and Postlude, and the short improvised clarinet duos which clear the air between compositions, Houle starts with an idea which the performers then process and interpret in real time. The overall shape of each piece is only fully revealed in its latter stages, and as the various strands are woven into something recognisable, the performers are effectively re-coding the source material.

As a composer Houle is undoubtedly indebted to the refined chamber trios of the late Jimmy Guiffre, though the juxtaposition of some decidedly more visceral urges is quite distinct. The uptempo swing passage which opens The Black Bird rudely shatters the pastoral tranquility of the Prelude, providing a dramatic canvas for Grdina and Houle to scrawl their intersecting lines. It could easily end in a joyous burnout, but instead a lush melodic core is unpeeled, and Houle’s plangent solo really hits the spot.

Big Time Felter toys with jagged rhythms, Houle and Grdina spinning irregular melodic cells before the group unite around its tightly drilled theme. The Dolphy-esque Canyamel is riven apart by Helias and Hemingway, and as they shift through the gears it’s a thrill-a-minute joyride. The wonderfully intimate and evocative tone poem Morning Song 1 is perhaps my favourite piece, though Helias’s typically muscular groove on Baseline triggers a real endorphin rush and pushes it to a close second.

Consistently thoughtful and thought provoking, Recoder walks an intelligent line between composition and improvisation and deserves to be heard.