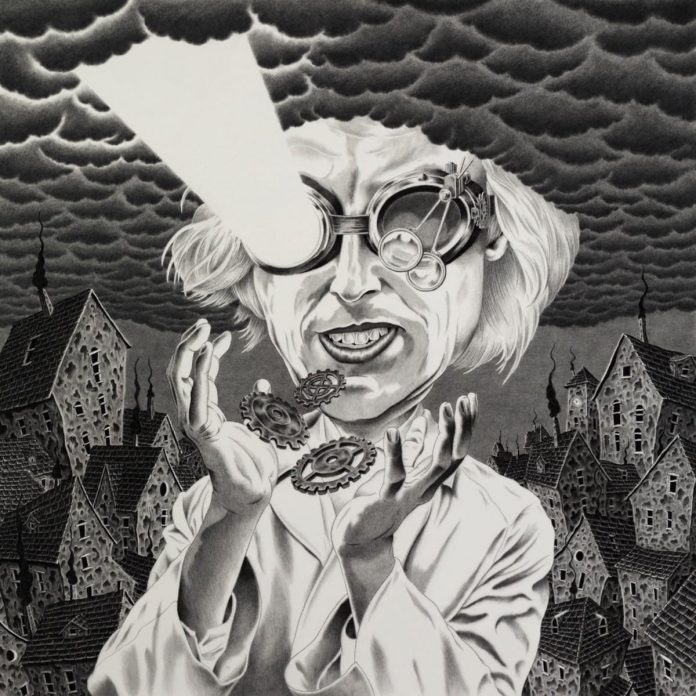 And now for something completely different …

I cannot think why this striking, richly conceived and handsomely realised project, recorded in 2012, was not released until now. Granted, the music’s predominant mood of dystopian angst, manifest in a sometimes scabrous mix of tersely off-centred riffs and sound shards, blended with occasional impressionist touches in a post-electric Miles mélange of jazz and rock, offers no easy passage either towards or away from those hinterlands of existence which would seem to claim Dada-esque centre stage here.

However: anyone who has responded to Kurt Weill and Weimar culture, the work of Michael Mantler, Henry Cow and Pere Ubu – or, especially, the writer Pierre Guyotat, such as his collaboration with the painter and printmaker Sam Francis on Wanted Female (1993) – will surely find much to move them.

The Northern Irish writer Ray Kane, whose work supplied the springboard for the project, has spoken of “a journey deep into the rotten beauty of past love” and of “the City” as it “flounders in darkness: a naked victim of the enormous belching of over-industrialisation”. Pitched somewhere between (and beyond) Captain Beefheart and Tom Waits, the extraordinary depth of resonance in the cavernous yet intimate bass/baritone sprechgesang of Andrew Plummer (who wrote nearly all the music) does full justice to the brooding intensity of theme, limned on occasion by what I experienced as the existentially pitched Romanticism of Together and Matthew Bourne’s Phosphorescent Darling.

The incisive and vibrant musicianship is throughout as potent thematically as it is shorn of any solo indulgence, serving always the unfolding and overarching idea of a “total art work”. I had only the pre-release promo to review but, in addition to digital distribution, the finished physical article will include album lyrics and three 12 x 12 inch fine art prints by noted Cornish illustrator Chris Odgers. Exceptional ambition, exceptional achievement: Bravo!

Thomas Fletcher - 11 August 2020
The Hemiola Trio are a fairly unknown group based in Barcelona with a name simply derived from a rather specific musical concept. Described in the...