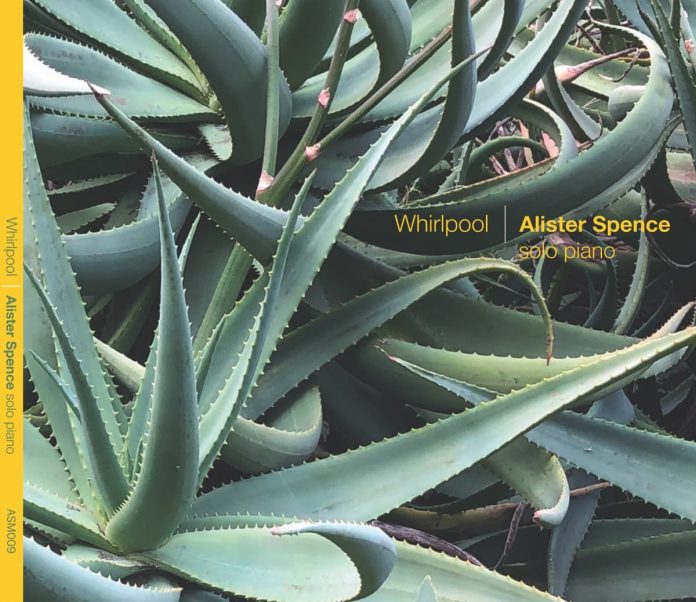 Australian jazz pianist and composer Alister Spence has led his own trio for 20 years, while also working with luminaries such as Glasgow saxophonist Raymond MacDonald, Japanese pianist/composer Satoko Fujii and US pianist Myra Melford. There have been solo performances on earlier albums, but Whirlpool is his first entirely solo release – an ambitious double-CD featuring 23 improvisations.

Track titles, all in lower-case, feature a lot of wordplay. Parenthesized prefixes offer two distinct meanings – a reversal as in (un)likely, or a different connotation, such as (some)what. I’d call it jazz-related improv. The albums opens with the lugubrious though gradually more melodic (re)new. There’s prepared piano on the rather hieratic (dis)similarity, and work inside the piano on the eerie (en)folded. (En)circle is vinegary and etiolated.

The second disc opens with the dynamic (over)taken, in a loosely swinging free tempo; (under)standing exploits a jangling tremolo effect. The brief (wide)spread features a small metal Tibetan singing bowl, which adds overtones or harmonics as it’s rubbed more vigorously; the colourful, eventful (re)animate features work inside the piano as well as on the keyboard.

I’ve always been impressed by Spence’s playing – in fact I can’t think of an album of his that’s less than excellent. His work is melodic, expressive, thoughtful and cerebral – not a criticism in my book. The album was recorded and mixed by Tim Whitten, who’s recorded all of Spence’s albums for the last decade, and is best known for his work with The Necks. A superb release.

Jazz Journal - 29 March 2022
Once upon a time, a group of aficionados, irked by the fact that opportunities to see 'The Ring' and 'Don Giovanni' were severely circum­scribed, decided to do something about...