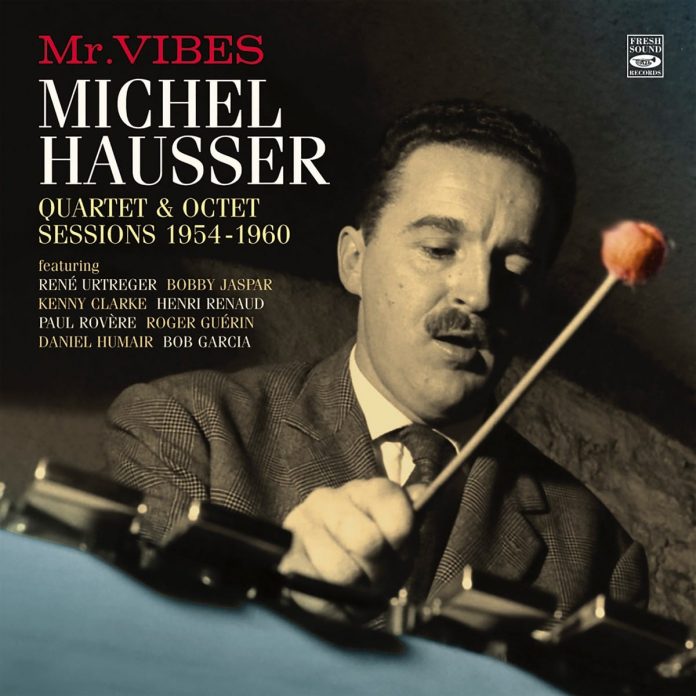 Swimming around the big four of Norvo, Hampton, Jackson and Burton in jazz’s vibraphone pool are less well-known fry, among whom is the Frenchman Michel Hausser. He was typical of a busy and almost self-sufficient continental jazz scene in which he was not alone among European vibes players, his immediate peers in Paris being the Hampton-inspired pair of Geo Daly and Roby Poitevin, and then the Belgian Fats Sadi. Roger Beaujolais reminded me a few weeks ago that the period was fertile for vibes players, with not only Bobby Hutcherson and Burton coming to prominence but also Lem Winchester, Walt Dickerson, Dave Pike and Eddie Costa.

Hausser rose a level in the 1950s after meeting Stephane Grappelli, with whose sextet he made his first recordings. None of those is included on this double CD, which covers the official sessions that Hausser recorded in quartet and octet between 1958 and 1960 and adds tracks from a jam session in 1958 and a concert in 1961 as bonuses. In the mid-1950s, competition among the Parisian malletmen was ferocious, and Hausser withdrew to Strasbourg when the Grappelli association ended.

The first 10 tracks on disc one feature the Hausser quartet in 1958, when he returned to Paris and managed to establish a club called Chat Qui Pèche as a jazz venue. He was on the rise again. Quincy Jones had chosen him for a recording date the year before, and his appearances at the club had become popular and memorable. In the studio and live at the Cannes Jazz Festival a few months later, the quartet further demonstrated the inevitable: that it was a simulacrum of the Modern Jazz Quartet, with Hausser in thrall to Milt Jackson. Nothing much wrong with that – jazz is full of imitators – except the always present possibility of disappointment. Here it sometimes arrived in flat chorus-endings before a chord change, a common case of a musician imprisoned by the sequence, rather than thinking beyond its end-markers.

Hausser learned much from the MJQ’s example but was reluctant to move beyond its shadow. Rue Dauphine is a plodder, though on Now’s The Time, drummer Dante Agostini at Cannes enlivens the game with timely interventions. When flautist Bobby Jaspar joined a Hausser quartet with different personnel a few months later on a studio date in Paris, the flute-vibes colouring worked well enough, particularly on a thorough workout of Bobby Timmons’s Moanin’. I Remember Clifford is a tasteful, almost funereal elegy, complete with echoey flute intro and coda.

Jaspar and Hausser met again three days after the previous collaboration, this time as the flautist’s quartet with the vibraphonist as guest. The band included Kenny Clarke. The head of Mysterioso is followed gingerly, and Hausser’s solo more than Jaspar’s has the measure of Monk. Clarke’s brushwork on Speak Low is perfunctory. The 1960 Hamburg recordings of the Hausser octet are super, with drummer Daniel Humair key on the brassy Opus De Funk with its vibes-piano head. Pianist René Urtreger excels Powell-like on Tadd’s Delight, showing how much the continentals had imbibed bebop and its aftermaths and how with greater numbers Hausser’s often cool MJQ pretensions in the chamber-music style could be confounded.

Of the three bonus tracks, two are by the Hausser All-Stars at Juan-les-Pins in 1961 while Wee Dot is from a 1958 jam session at Cannes festival in which Hausser more than holds his own at a jam with Zoot Sims, Donald Byrd and others. Americans mixing it with a European on equal terms, no less. It became a common occurrence.