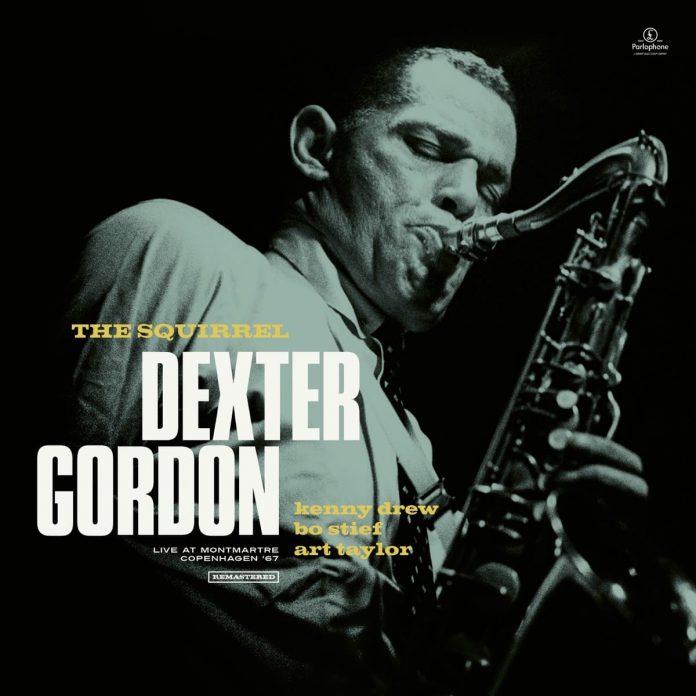 Released briefly as a Blue Note CD in the 90s, this material makes its first appearance on vinyl as a four-track double-LP set. That is one track per side on each record with the longest, Cheesecake, coming in at just under 21 minutes. Gordon was on fire at this live session at the Jazzhus in Copenhagen at the end of a month-long run at the club. He was also at the peak of his career during the 60s having put down arguably his greatest pair of LPs for Blue Note in 1962. After these studio recordings he set off for an engagement at Ronnie Scott’s in London then went over to the continent and did not go home until 1976.

Good though those studio recordings were, it is instructive to hear Dexter live, in front of an appreciative audience, blowing up a storm and with a top-notch rhythm section urging him on all the way. He begins with The Squirrel, a Dameron composition he had not played before and gives it a 15+ minute workout. Dexter’s invention never flags throughout his long solo, the newly minted phrases toppling out as Taylor and the others drive him relentlessly. Art Taylor plays with more swinging aggression on this record than I have heard him do anywhere else. He is pushing Dex all the way and the leader responds with a cracking solo, full of invention. At the end, the two swap four bar exchanges, Dex wild and Taylor thunderous. Taylor here sounds like a mixture of Art Blakey and Philly Joe Jones, rolled into one.

Dexter’s Cheescake was first heard on Go, his classic 1962 Blue Note release, but here he stretches out with a 14-minute solo before Kenny Drew takes over and then bassist Stief gets his only solo in the set. The bass player stays in the background mainly here but is far from overwhelmed by the three heavyweights of jazz he is playing with. His bass lines are firm all through and he solos confidently. If he is often not heard much on the up-tempo selections it is due to Gordon’s strong tone, the piano comping and Taylor’s furious drumming. Again, Gordon is consistently inventive and imaginative in his long solo, not fazed at all by the fast tempo.

The atmosphere is much more relaxed on You’ve Changed, where the quartet play at ballad tempo, Gordon lyrical, as is Drew, while Taylor plays it quietly with brushes. Stief can be heard clearly on this track. This sterling live session ends with a 17+ minute workout on Sonny Rollins’ Sonnymoon For Two and we are back in swinging blues territory. The solid remastering of this concert for vinyl emphasises the small stage at the Jazzhus and the sound of four musicians cramped on it and playing loudly which gives a “you are there” impression.

Previous articleCraig Green: Love Notes In Binary Code
Next articleKick It: A Social History Of The Drum Kit

Three musicians, more than 20 instruments, and the widest range of sounds you can possibly imagine is perhaps the best way to sum up...

Thanks to its anchoring by Alyn Shipton, BBC Radio Three’s Jazz Record Requests has a permanency in the jazz calendar bestowed on it by...

Tenor-man Ike Abrams Quebec is a somewhat forgotten figure these days but from the mid 40s to the early 60s his distinguished Gene Ammons...

This is another excellent instructional jazz piano book from Jeb Patton. It’s aimed at both pianists and non-pianists, with the primary intention of starting...

She Who Weeps merges elements from two earlier Wilson albums - the standards of Blue Skies and the asymmetric funk of Jumpworld. Her sour,...

Gordon was on fire at this live session at the Jazzhus in Copenhagen at the end of a month-long run at the club. He was also at the peak of his career during the 60s having put down arguably his greatest pair of LPs for Blue Note in 1962.Derek AnsellDexter Gordon: The Squirrel
Advertisement