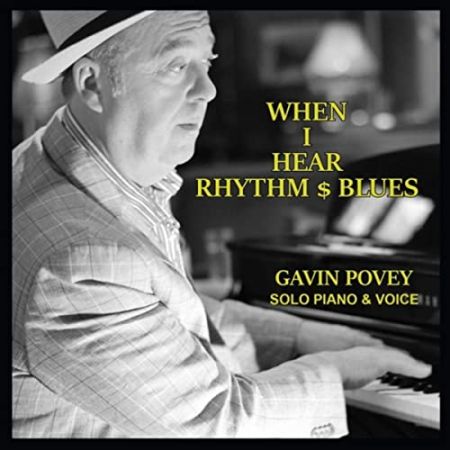 His playing based on early piano styles such as swing, stride, boogie and rhythm and blues, Gavin Povey showcases a palpable talent in When I Hear Rhythm $ Blues. This truly solo album provides a genuine display of Povey’s capabilities as it is just him singing and playing throughout.

Povey’s energy and vigour is projected from the very start of the album with Dr Blues. His virtuosity animates this syncopated boogie throughout, pointing to one of his foremost inspirations: Professor Longhair.

As first highlighted by the third track, Continental Cowboy, Povey’s abilities stretch across many varying styles, making this album lively and moving. Despite this, it is the ballad setting of this third track which allows his piano playing to radiate. Povey’s singing, which seems to really fit with this track, produces a reflective and nostalgic edge. As one of six Povey originals here, Continental Cowboy demonstrates his ability to create a beautiful, melodic yet virtuosic song, complementary to the other faster-moving tracks.

Povey’s treatment of the four cover tracks on this album are brilliant. He applies his own touches, such as the lax and somnolent vamp on Tom Wait’s Chocolate Jesus, a merry New Orleans jazz mood on At The Fat Man’s, as well as a mournful approach to House Of The Rising Sun which helps to express the song’s sombre tale.

With all the tracks recorded “live” in the studio as straight takes, singing and playing together, with no technical manipulation, Povey’s talent and piano genius impresses me even more. Povey felt that he “had to stand up and be counted”. This he unquestionably has accomplished, and wonderfully so.

Dave Jones - 02 February 2019
The press release and minimal CD sleeve don’t provide much vital information. Amongst other pianistic and keyboard influences, the effect of the leader hearing Joe Sample at the age...