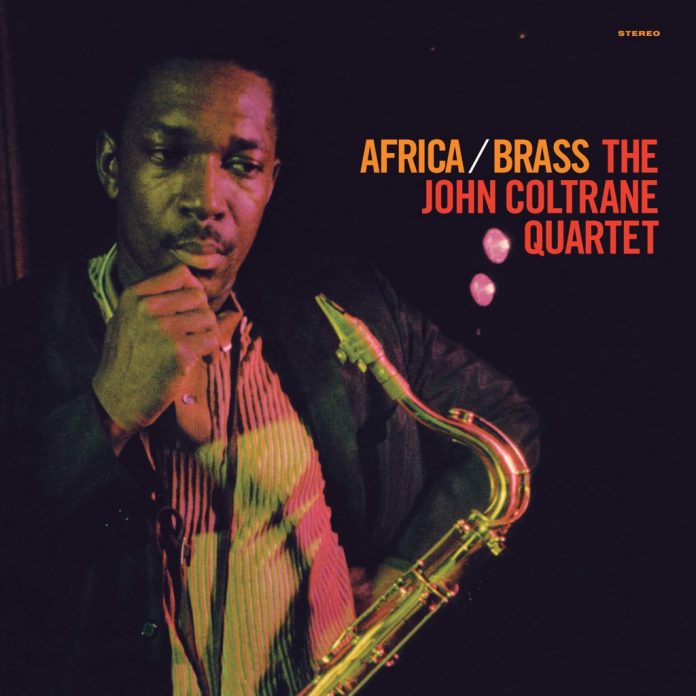 Coltrane celebrated his new contract with the giant ABC Paramount-owned Impulse label with a presentation of his quartet augmented with between seven and 14 brass instruments. Even so, as he said on the liner, he still wanted to keep the feeling of the quartet.

The main work here is the 16-minute Africa where Trane’s quartet stretches out with background harmonies from the likes of Freddie Hubbard, Booker Little and Julius Watkins among those contributing brass interjections. It does have a sound of Africa about it with the brass representing various animals out in the wild and the drone effect of the music from Trane and his group. Coltrane’s long modal improvisation sets the mood of the piece and his lines become more and more fractured and intense as it proceeds. The two bass players dart and weave around him all through the track adding another dimension of mysterious sound. Towards the end Elvin Jones plays one of his most intricate solos full of thrashing cross rhythms and then Coltrane returns to take it out although he leaves the last word to the two bass players.

This recording was made just before Trane employed Jimmy Garrison as his regular and, as it turned out, long-term bass player but here the duties are shared by Reggie Workman, his current bassist, Art Davis, his NYC-only bass player and Paul Chambers, on leave from the Miles Davis quintet. With so much talent in the brass ranks it seems strange that neither Little, Hubbard or indeed Eric Dolphy had any solo opportunities. But then the emphasis was on the quartet and we do get solos from Tyner and Jones.

The other tracks are just as intriguing with Coltrane playing a rich soprano solo over the 6/8 quartet and brasses background of Greensleeves. This bouncing jazz version might have surprised Henry VIII (alleged to have written it) although Trane did paradoxically stay close to the original composition, not least in keeping the original 6/8. Still on a folk music kick, Coltrane dug out the traditional Song Of The Underground Railway, an attractive melody which Trane plays more or less straight with churning rhythm and brass interjections. Blues Minor is a hard-swinging head arrangement put together at the date with fervent, leaping tenor all through.

This was the not quite final classic quartet but Coltrane on his first major record company contract, playing and experimenting as he meant to go on. You might need sunglasses when you take out and play the bright orange coloured vinyl record.

Nigel Jarrett - 27 May 2019
Concentration and reasonable compression are qualities we might demand of jazz. We eschew the overblown as much as the stray thought and the half-hearted involvement. Argentine pianist Santiago Leibson...