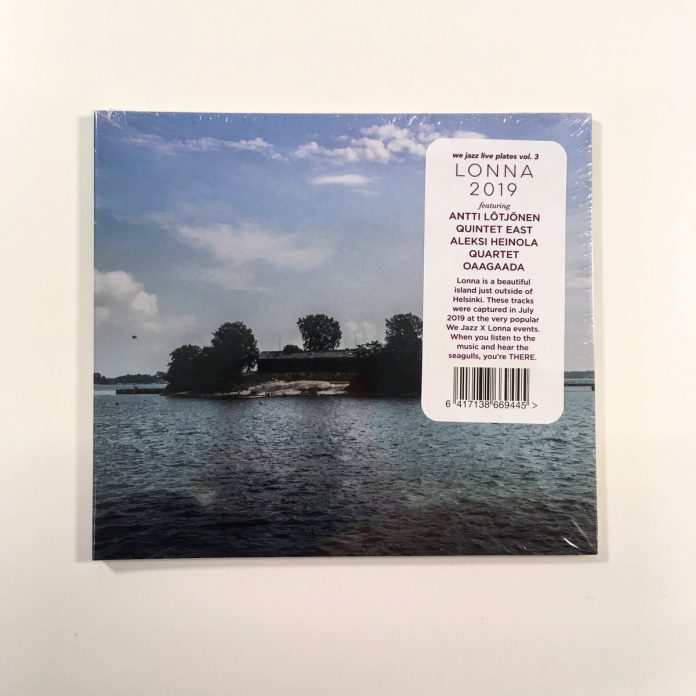 There’s something about the seaside that makes for breezy, easy-going jazz. So many beloved recordings have been made by the beach, from Concert By The Sea to all those epic Antibes, Newport and Live At The Lighthouse albums.

Maybe playing on a tiny island intensifies this effect, as evidenced by this sampler from the annual concert series on a rocky islet near Helsinki harbour. These recordings, amiable but never lazy, date from July 2019 and go some way to replace this summer’s cancelled season.

Oaagaada is the freest of the three bands here, with Aleksi Heinola Quintet the most conventional, and Antti Lötjönen Quintet East finding the golden mean between composed bop and free exploration.

For close followers of the Finnish scene, Oaagaada may be the most interesting as this marks their recorded debut, and is also one of the label’s first Finnish bands from beyond Helsinki, besides Tampere trio Black Motor.

Over a drone from a harmonium-like shruti box, their longest piece begins with a scraggly, pleasantly meandering mood. It builds to an ecstatic intensity that suggests influences from Chicago, New Orleans and South Asia, as well as Don Cherry’s ethno-jazz forays.

Cherry also gets a nod from Antti Lötjönen Quintet East, who offer a loping version of his Art Deco – title track of a late bop album with bassist Charlie Haden, whose Quintet West inspired this band’s name.

The leader – the Helsinki jazz scene’s premier bassist and veteran of the influential Five Corners Quintet – plays a long, expressive solo, which he hardly does on his first album as a leader, released last spring. And this summery tune is more easy-going and accessible than most of that bristly, challenging debut.

Aleksi Heinola Quintet is the liveliest of the bands here, with one track on the LP and two on the CD and download. They’re picture-perfect slices of 60s Blue Note hard bop. Drummer Heinola and American bassist Nate Francis lay down a supple framework for solos by Manuel Dunkel on tenor, Mikael Jakobsson (ex-Five Corners Quintet) on Rhodes organ and Mikko Karjalainen on trumpet, sounding much like fellow Five Corners graduate Jukka Eskola’s Soul Trio.

This pleasantly varied sampling of the Finnish scene is just right for a sunny summer afternoon with cold refreshment in hand, a desert island disc indeed.