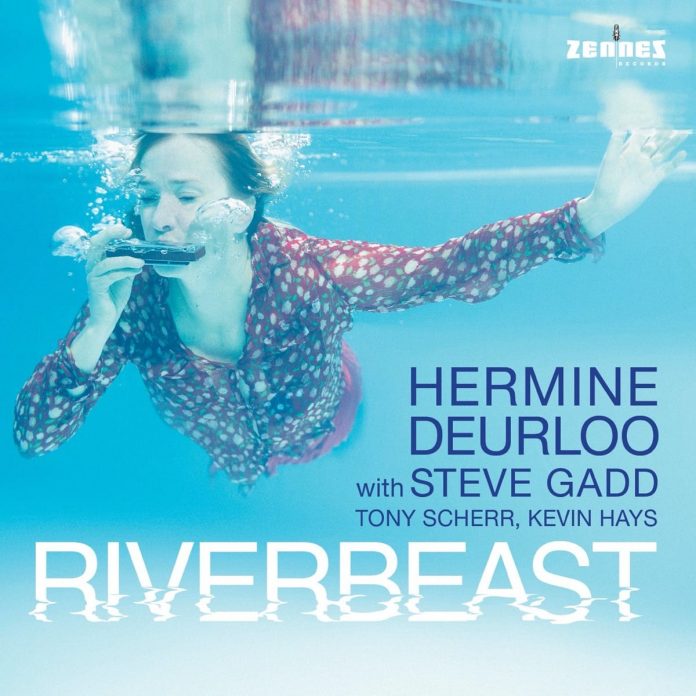 As fate would have it, the Dutch chromatic harmonica player Hermine Deurloo was able to conclude a little tour around The Netherlands with drummer Steve Gadd just before Covid-19 put a halt to all cultural events in March. The tour promoted Riverbeast, which featured Gadd, pianist Kevin Hays and bassist Tony Scherr as the core of a crafty, lightweight piece of jazz pop.

Eclecticism is Deurloo’s middle name. She worked with both maverick saxophonist Willem Breuker and various mainstream big bands. Her records integrate pop and chamber music into the jazz idiom. For Riverbeast, Deurloo surprisingly got hold of Steve Gadd, the famous all-rounder who has supported a staggering list of celebrities, among them Chet Baker, Frank Sinatra, Chick Corea, Paul Simon and Eric Clapton. Gadd led the popular jazz-funk and fusion bands The Gadd Gang and Stuff.

In the context of schmaltz, Riverbeast is top-notch. The inclusion of Gadd guarantees gently probing accompaniment and an effective variety of signals, executed with the precision of a clock maker. Deurloo’s clarity of line and fluent phrasing is impressive, her manner of ending solos with fearless high notes masterful, her tone sweet and round.

But top-notch is a dubious honour at best. Most of the songs that employ shuffling gaits and minor chord sequences signify, in that order, J.J. Cale and Steely Dan, unfortunately of the lukewarm variety. The title of Riverbeast implies menacing waterfalls but the tune offers little more than the leakage of a fridge. Then again Blueberry Hell, a mild paraphrase of the classic Fats Domino tune, wins the trophy for coolest title, whereas If We Can’t Trust Each Other, featuring the smooth, soulful vocals of Alain Clark, meddles in the monotonous fight of the record’s radio-friendly championship. Genuine excitement finally arrives with Hoop And Pole’s snappy fusion and Zombie Chicken’s hip swamp soul.

Riverbeast places Deurloo in the Dutch tradition of excellent post-war jazz players – Pim Jacobs, Louis van Dijk, Wim Overgaauw – who successfully purveyed easy-listening fare to the optimistic suburban crowd in the 70s. Nowadays suburbia is hooked on dance and optimism is passé. Deurloo deserves a bigger audience but it is doubtful whether her latest’s offering has the strength to travel beyond the confines of waiting rooms and the airport shopping strip.

Find out more about Hermine Deurloo: Riverbeast at http://www.herminedeurloo.com

He was a blues player and he wasn’t a jazz player - especially in the more strictly defined terms of the 1960s, when the...

From articles and books, interviews and face-to-face meetings it is clear that as with people in other walks of life jazz musicians are not...

I don’t think anyone would disagree with David Freeman’s claim in his book that the blues changed the world. It is much more than...

Steve Smith's seven-year associ­ation with the heavy-rocking chart-topping Journey is easily discerned in this likeable Californian club date, but he also takes the opportunity...