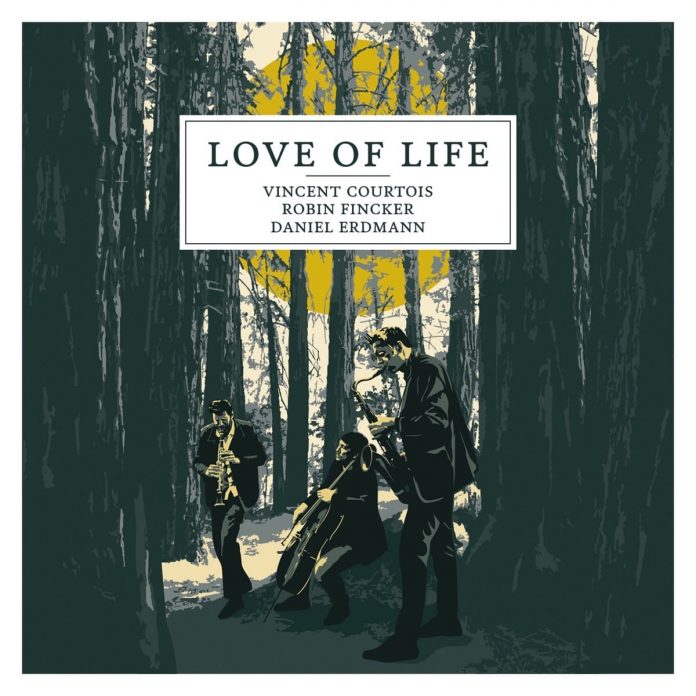 French cellist and composer Vincent Courtois serves up a highly original and engaging album with Love Of Life. Much of the album’s appeal lies in the variety of compositions and the tones conjured from the cello. One moment there is intricate chamber jazz, the next, driving rock rhythms, and, on occasion, almost electronica-influenced string textures that sound like synth pop from Kraftwerk and Ultravox.

Blending the cello with clarinet and tenor saxophone, the trio offers a tightly knit sound, weaving ideas and musical discussions in a way that sounds effortless, but clearly demanding a high level of dexterity and understanding between the musicians.

Several tracks open with Courtois establishing the mood and pace with distinctive phrasing on the cello before Fincker and Erdmann join in to develop the themes. In the gentler tracks there is sometimes the feel of Dixieland jazz at work, with a sly sense of humour to some of the music. The Road sounds like a musical interpretation of something or someone running out of steam on a journey (perhaps drawing on the Autobahn influence of Kraftwerk?), whilst the dramatic, pulsing beat that opens The Seawolf could almost have come from The Beatles’ Get Back. Elsewhere, in some of the musical intricacies on display, the influence of John Surman can perhaps be detected.

If the references here to a range of musical influences gives the impression this is any way a derivative album, then don’t be misled. Love Of Life has a unique voice and appeal. It goes beyond jazz but draws heavily from it. The more I have listened to it, the more I have got from it. Really engaging stuff.

Hugh Rainey - 14 December 2021
Aged 18, JPJ turned professional in 1912, in the dawn years of the jazz era. Talented and ambitious, with diverse musical interests, he studied classical music theory. Over a...