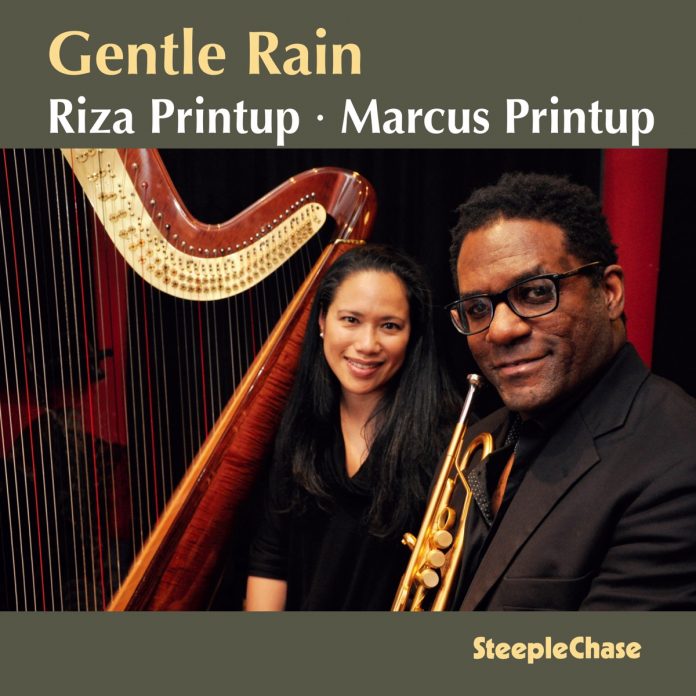 Harpist Riza (née Hequibal) and trumpeter Marcus have been married since 2010 and have been playing duets together for at least as long, if not longer. Gentle Rain is the first time they’ve committed their duets to record, playing a set of ballads that includes two originals from Riza (Madison and When He Embraced Me With His Eyes) alongside numbers from composers including Hoagy Carmichael, Michel LeGrand and Thad Jones.

Riza and Marcus are talented players, with an admirable precision and control displayed throughout the album – Marcus, in particular, is capable of subtle expressiveness. Cy Coleman’s It Amazes Me is the finest example of Riza’s harp playing, both on the introduction and in her solo. Marcus’s expressive playing is highlighted on Carmichael’s The Nearness Of You.

Riza’s compositions follow the pattern set by the better-known numbers. They’re both slow, graceful, tunes opening with a single instrument (in both cases, the harp) before the second enters. When He Embraced Me With His Eyes is the more engaging of the two: Marcus adds mute to the trumpet for the final couple of minutes, adding a fresh tonal quality to the track (he also uses a mute on Caruso, by Lucio Dalla).

However, across the album as a whole the decision to focus exclusively on ballads, the presence of just two instruments and the lack of variation in tempo does result in an absence of excitement. Gentle Rain is undeniably a pleasant listening experience, but a little less restraint, a wider emotional spectrum, would have led to a more essential recording.

Discography
Gentle Rain; A Child Is Born; Madison; It Amazes Me; The Nearness Of You; Caruso; Here’s To Life; When He Embraced Me With His Eyes; How Do You Keep The Music Playing (59.26)
Marcus Printup (t); Riza Printup (hp). February 2019, no place of recording given.
SteepleChase SCCD 31893