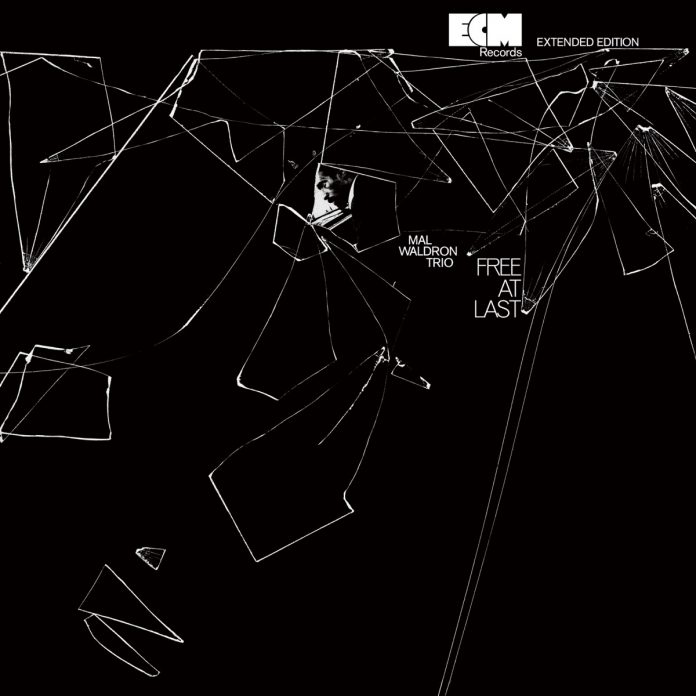 In his excellent blog, Ethan Iverson comments that on Free At Last, “everything is reduced to the drone and the riff. [Waldron’s] touch has gotten more secure and elemental… [He] wouldn’t really develop further until his death in 2002.” However, Iverson continues, “The band … is more on the B-team side, with Waldron having the best time of anyone present.”

That’s a little harsh on Swiss bassist Isla Eckinger, with whom Waldron frequently performed, and drummer Clarence Becton, who I think make up an excellent team, if not quite in the first rank.

Waldron is a rare example of a minimalist in jazz [excepting the Scandinavian legions – Ed], and his work continues to intrigue. Chris Abrahams of The Necks was deeply influenced by him. “There’s a hypnotic dimension”, he commented when I interviewed him recently. “He appeared to latch on to a phrase and work it, so that it almost hovered away from the rhythm section.” As Iverson memorably put it, “A short stutter of melody will fit anything: any harmony, any place in the beat, any tune.”

In his liner notes, Waldron described Free At Last as “My meeting with free jazz. Free jazz for me does not mean complete anarchy… You will hear me playing rhythmically instead of soloing on chord changes.” It’s groove-based and so not free in that sense; “playing rhythmically” refers to Waldron’s minimal style. The compositions are chord-based, but simple – mostly hard-driving, bluesy and modal.

The album was the very first ECM session, recorded in 1969. It was the first of three Waldron albums recorded by ECM during 1969-1971, the others being Spanish Bitch with Eberhard Weber, and The Call with the same trio as Free At Last. It’s reissued here with alternative takes of Balladina, 1-3-234, Boo and Willow Weep For Me – it’s available initially as a double-LP, and later in CD and digital formats. It’s good to have the alternative versions – those of the two ballads in particular, which are more propulsive. An epochal release, for more than one reason.

In his review of Mal Waldron’s Free At Last, your reviewer notes Ethan Iverson’s judgement of Waldron’s colleagues: “The band … is more on the B-team side…’.

He then judges Iverson’s judgement: “That’s a little harsh.”

And then judges Waldron’s band-mates to be “an excellent team, if not quite in the first rank”.

But, surely, being not quite in the first rank means being in the second rank? And isn’t that what Iverson meant by “on the B-team”?

I had the great pleasure to hear Mr Waldron playing in duo with Steve Lacy at Brecon in 1999. A very tall pianist, with fine tartan trousers. Listening to Lacy and Waldron playing Monk’s music, I felt the familiarity of the tunes giving way to the edgy rhythms of their melodies. This felt like a very direct connection to jazz history.

Apologies, I should have written “if not absolutely of the first-rank”. So my ordering of accolades is on these levels:

Stephane Grappelli's position in the acoustic Quintette du Hot Club de France was interesting. As the stand-up flamboyant, a lone violinist in an all-strings...

Although he played piano as a child, it wasn't until he was 18 and serving in the military in Korea that Freddie Redd seriously...

Hermeto Pascoal is an enigma. He creates music out of almost any object that he can get his hands on, from his beard to...

Joy Unlimited was the name of one of the bands led by the great Barbados-born trumpeter and flugelhornist Harry Beckett, and one of his...

For its visit to London, Arthur Blythe's brilliant quintet became a quartet, due to the indisposition of cellist Abdul Wadud. Having recently heard the...

"Waldron is a rare example of a minimalist in jazz, and his work continues to intrigue ... An epochal release, for more than one reason"Andy HamiltonMal Waldron Trio: Free At Last (Extended Edition)
Advertisement