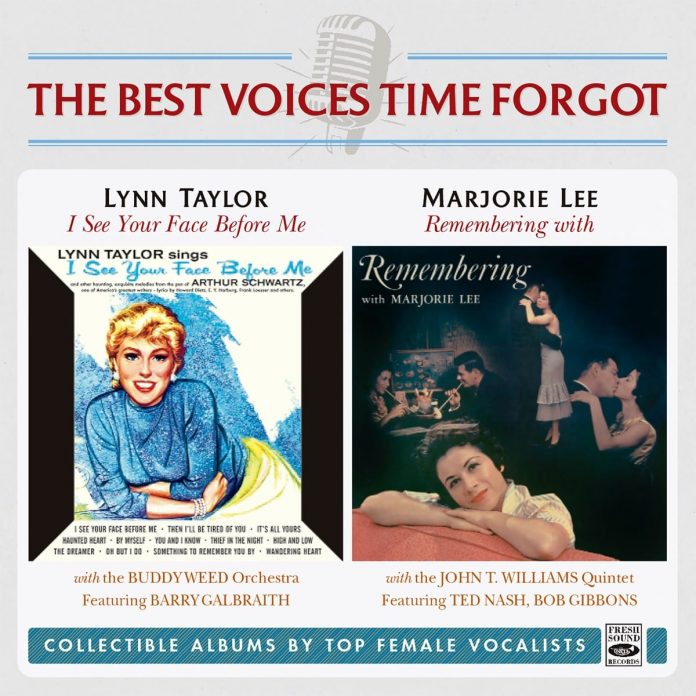 A singer whose repertoire and style was mostly suited to the pop music of the day, Lynn Taylor (1937-1979) worked for a while in New York City where she encountered composer Arthur Schwartz and it is his music (with various lyricists) that she sings in this session from the mid-1950s.

Whether singing ballads or bouncier songs, Taylor has a happy sound that blends well with Schwartz’s melodies. The singer’s accompanists are relaxed with several short solos by Buddy Weed, the horns being a discreet presence. Taylor’s last four tracks, which are not Schwartz’s compositions, come from an album entitled Ernie Kovacs Presents… Buddy Weed And Introduces… Lynn Taylor.

In 1962, Taylor became a member of folk trio The Rooftop Singers although her tenure with the group was brief and in 1963 she moved to California where she remained for the rest of her short life.

Starting her professional career in the early 1940s, Marjorie Lee sang with the orchestras of Richard Himber, Joe Reichman, and Russ Morgan. She appeared on radio with Himber in 1942 and had a successful 1945 recording with Morgan of Remember When. Later she sang with David Rose, whose orchestra was on Red Skelton’s television show for several years from the early 1950s.

Lee was probably on screen often although IMDB lists only one show, in 1953, in which she appears. After a short spell off the scene raising a family with husband Bernie Halpert, a drummer, she returned to music with the album heard here.

Singing a selection of mainly well-known songs, Lee has a vocal sound that is clear and uncluttered and here and there slightly torchy. Lee sings on only eight of the 12 tracks from this session, her accompanists an effective jazz quintet. Of the other four songs, two are features for alto saxophonist Ted Nash (I Let A Song Go Out Of My Heart and Something To Live For) and two feature pianist John T. Williams, One Love and Our Waltz. Elsewhere, Williams is a subtly persuasive accompanist, notably on Maybe You’ll Be There and Alone Together.

This release is in Fresh Sound’s growing series The Best Voices Time Forgot, which recalls singers often touching on jazz, and this is another pair worthy of attention.

Hear/buy Lynn Taylor: I See Your Face Before Me / Marjorie Lee: Remembering With … at freshsoundrecords.com

If you have read my previous reviews of this series, you will know by now that I am a big fan. Set 6 contains...

Following on from Mulligan Memories, part 1 and part 2, Arlyne Mulligan concludes the story of her life with Gerry Mulligan as told to Gordon...

This is the third edition of Ted Gioia's history of jazz – a living beast that in this incarnation has grown by 150 pages...

The Miles Davis Quintet is augmented by Julian "Cannonball" Adderly on alto sax for this album and although I find it less satisfying than...

"This release is in Fresh Sound's growing series The Best Voices Time Forgot, which recalls singers often touching on jazz, and this is another pair worthy of attention"Bruce CrowtherLynn Taylor: I See Your Face Before Me / Marjorie Lee: Remembering With ...
Advertisement