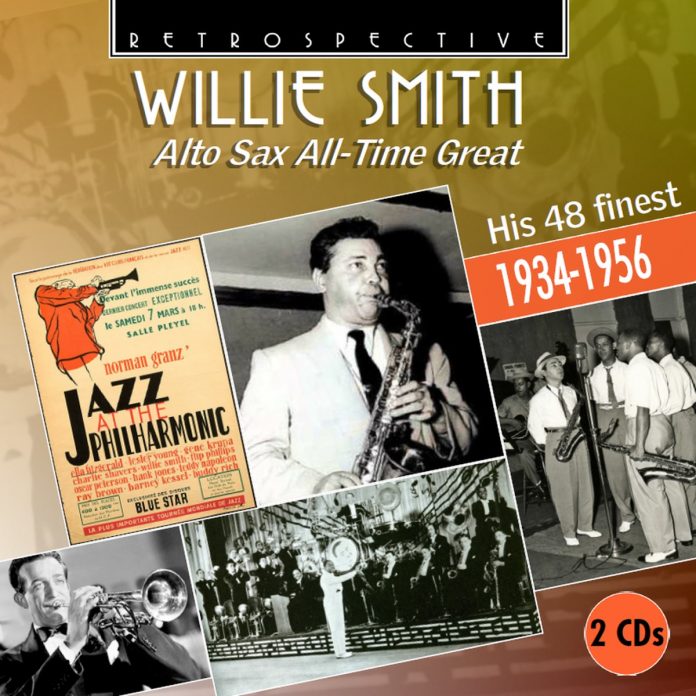 Together with Johnny Hodges and Benny Carter, Willie Smith (1910-1967) was one of the most influential and prolific alto saxophonists of the swing era. In conversation with Stanley Dance, he said of Hodges and Carter “I used to steal their stuff off the records”. But he was never simply a copyist. With a driving style and distinctive instrumental voice, Smith was equally at ease as a section boss in big bands or in small groups – some of which he led himself.

Curiously, and unlike his mentors, Smith was largely forgotten in the 10 years before his premature death from cancer. He was absent from many of the jazz reference books and under-represented in the record catalogues, so this compilation, despite some flaws, is to be welcomed.

Born in Charleston, South Carolina, Smith (William McLeish) attended Fisk University (where he studied chemistry) and also met his future boss, Jimmie Lunceford. The opening tracks from 1934 with the Lunceford orchestra feature Smith as soloist and section leader. The outstanding title is Uptown Blues, on which he floats (with shades of Johnny Hodges) above the ensemble in a haunting and melancholy solo. Faster numbers include Blue Blazes and Avalon, again demonstrating the military precision and (un-military) swing of the Lunceford band, with a mischievous Smith peeking out at intervals. In contrast, How High The Moon has him delivering a short rabble-rousing solo to a noisy audience at a JATP concert Los Angeles in 1945.

Smith remembered his JATP years with affection. “No music to read! Easy. Go out on the town every night. Big deal.” Unfortunately, none of his compatriots – including Howard McGhee and Illinois Jacquet – are heard on this and other JATP excerpts, or after his famous introduction to Stardust at a Lionel Hampton Just Jazz Concert in Pasadena in 1947.

After (reluctantly) leaving an increasingly irresponsible Lunceford in 1942, Smith found a happier home in Harry James’s company that would last for 16 years, The band’s bassist Red Kelly recalled that Willie ”was the heart and soul of the band. He would grab a band all by himself on alto saxophone and swing it!” I’m Confessin’ and a lazy Tuxedo Junction verify this observation. Needless to say, James and Smith rise to, and above, the challenges of such titles as Cotton Tail, Perdido, East Coast Blues and a scorching and extended New Two O’Clock Jump.

Although there is only one example (Please Be Kind) from Smith’s short tenure with Ellington – to replace Johnny Hodges – he can he heard on some 1950s concert performances on other compilations. That said, Please Be Kind and Caravan (with Ellington and Strayhorn on piano and organ) are immensely satisfying. Small group, and Smith-led 1945 sessions with Dodo Marmarosa, Barney Kessel, Red Callender and Jo Jones, produced a breakneck Smith composition, Not So Bop Blues, an alternating slow/fast ravishing version of Tea For Two, and a poignant Sophisticated Lady. Four recordings by The Keynoters feature Nat King Cole as pianist (disguised as “Lord Calvert”) with Callender and Jackie Mills on drums. Their interpretations of The Way You Look Tonight, I Can’t Believe You’re In Love With Me, My Old Flame and Airiness A La Nat (all from 1946) have Smith in excellent and restrained form, with reflective and supportive solos from the piano player.

With detailed discographies and informative notes by Digby Fairweather this is – apart from the brutally truncated JATP and Just Jazz performances – an overdue and fitting tribute to an unfairly neglected musician, who, Hughes Panassié noted, blended “a powerful execution [with] an indomitable fire. As soon as he gets into a solo, he is seized by an impetuousness and a burst of force and ideas”. Ecoutez, les enfants, and you shall hear.

Click here for 10% off the entire Retrospective catalogue, including this title, using code JJ2020

This Jimmy Smith compilation CD is a little confusing. Whilst purporting to be a reissue of two albums – Bashin’ and Midnight Special, it...

Been a while. For which, apologies. Health. Family. “Stuff”. Plus a certain amount of what the Catholic Church calls “discernment”, which basically means looking...

Aside from the obvious conclusion that the musician and filmmaker are singularly important creators in their fields, probably the one area where they truly...

This is a collaboration of revered figures from diverse directions: free jazz, jazz rock, bop, even rock 'n' roll. They are all competent in...